A common feeder bird with clean black, gray, and white markings, White-breasted Nuthatches are active, agile little birds with an appetite for insects and large, meaty seeds. They get their common name from their habit of jamming large nuts and acorns into tree bark, then whacking them with their sharp bill to “hatch” out the seed from the inside. White-breasted Nuthatches may be small but their voices are loud, and often their insistent nasal yammering will lead you right to them.

White-breasted Nuthatches forage up, down, and sideways over tree trunks and around large branches. They often (though not always) start high in trees and move down them head first, pausing to crane their necks up and back, toward the horizontal, for a look around. They probe into bark crevices or chip away at wood to find food. When they find large nuts and seeds, they jam them into the bark and hammer them open. White-breasted Nuthatches often store seeds and insects one at a time, and somewhat haphazardly, under loose bark on their territory. They typically hide the food by covering it with a piece of bark, lichen, moss, or snow. White-breasted Nuthatches live in pairs year round and chase other nuthatches from their territory. Agitated birds fan their tails, flick their wings, or raise the feathers of the back. A bird backing down from a confrontation typically raises its bill and tail, and droops its wings. In winter White-breasted Nuthatches join groups of chickadees, titmice, and woodpeckers to forage.

Females build the nest on their own, lining the nest cavity with fur, bark, and lumps of dirt. She then builds a nest cup of fine grass, shredded bark, feathers, and other soft material. White-breasted Nuthatches often reuse their nest holes in subsequent years.

The largest nuthatch, this is still a small bird with a large head and almost no neck. The tail is very short, and the long, narrow bill is straight or slightly upturned.

White-breasted Nuthatches are gray-blue on the back, with a frosty white face and underparts. The black or gray cap and neck frame the face and make it look like this bird is wearing a hood. The lower belly and under the tail are often chestnut. 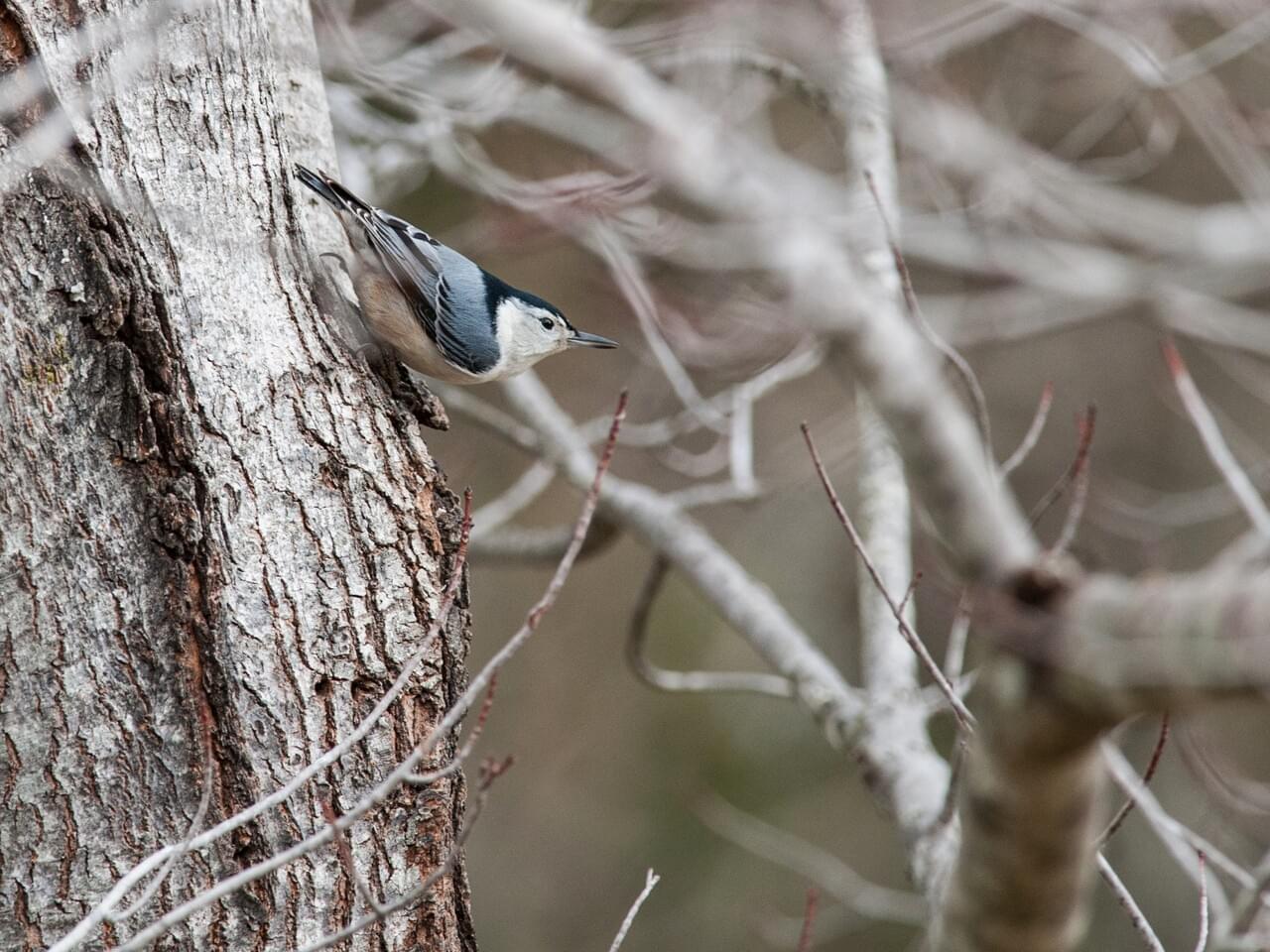 White-breasted Nuthatches are the largest North American nuthatch, and the only one with clear white on the face all the way around the eye. Brown Creepers move along tree trunks like nuthatches, but they're brown instead of gray, with a much longer tail. White-breasted Nuthatches have shorter tails and longer, more pointed bills than chickadees or titmice.