This common, large songbird is familiar to many people, with its perky crest; blue, white, and black plumage; and noisy calls. Blue Jays are known for their intelligence and complex social systems with tight family bonds. Their fondness for acorns is credited with helping spread oak trees after the last glacial period.

Blue Jays are found in all kinds of forests but especially near oak trees; they’re more abundant near forest edges than in deep forest. They’re common in urban and suburban areas, especially where oaks or bird feeders are found.

Blue Jays glean insects and take nuts and seeds in trees, shrubs, and on the ground; they also eat grains. They also take dead and injured small vertebrates. Blue Jays sometimes raid nests for eggs and nestlings, and sometimes pick up dead or dying adult birds. Stomach contents over the year are about 22 percent insect. Acorns, nuts, fruits, and grains made up almost the entire remainder. Of 530 stomachs examined, traces of bird eggs and nestlings were found in only 6 stomachs, although a search was specially made for every possible trace of bird remains. Blue Jays hold food items in feet while pecking them open. They store food in caches to eat later.

This common, large songbird is familiar to many people, with its perky crest; blue, white, gray, and black plumage; and noisy calls. Blue Jays are known for their intelligence and complex social systems, and have tight family bonds. They often mate for life, remaining with their social mate throughout the year.

Only the female incubates; her mate provides all her food during incubation. For the first 8–12 days after the nestlings hatch, the female broods them and the male provides food for his mate and the nestlings. Female shares food gathering after this time, but male continues to provide more food than female.

Some individual nestlings begin to wander as far as 15 feet from the nest 1-3 days before the brood fledges. Even when these birds beg loudly, parents may not feed them until they return to the nest; this is the stage at which many people find an “abandoned baby jay.” If it can be restored to or near the nest, the parents will resume feeding it. The brood usually leaves the nest together usually when they are 17-21 days old. When young jays leave the nest before then, it may be because of disturbance. The jays are usually farther than 75 feet from the nest by the end of the second day out of the nest. Young remain with and are fed by their parents for at least a month, and sometimes two months. There is apparently a lot of individual variation in how quickly young become independent.

Blue Jays communicate with one another both vocally and with “body language,” using their crest. When incubating, feeding nestlings, or associating with mate, family, or flock mates, the crest is held down; the lower the crest, the lower the bird’s aggression level. The higher the crest, the higher the bird’s aggression level; when a Blue Jay squawks, the crest is virtually always held up.

Blue Jays have a wide variety of vocalizations, with an immense “vocabulary.” Blue Jays are also excellent mimics. Captive Blue Jays sometimes learn to imitate human speech and meowing cats. In the wild, they often mimic Red-shouldered and Red-tailed hawks, and sometimes other species.

Blue Jays are disliked by many people for their aggressive ways, but they are far less aggressive than many other species. In one Florida study, Red-bellied Woodpeckers, Red-headed Woodpeckers, Florida Scrub-Jays, Common Grackles, and gray squirrels strongly dominates Blue Jays at feeders, often preventing them from obtaining food, and Northern Bobwhites, Mourning Doves, White-winged Doves, Northern Mockingbirds, and Northern Cardinals occasionally dominated them as well. Sometimes Blue Jays mimic hawks when approaching feeders. This may deceive other birds into scattering, allowing the Blue Jay to take over the feeder, but most birds quickly return after the jay starts feeding.

Blue Jays carry food in their throat and upper esophagus—an area often called a “gular pouch.” They may store 2-3 acorns in the pouch, another one in their mouth, and one more in the tip of the bill. In this way they can carry off 5 acorns at a time to store for later feeding. Six birds with radio transmitters each cached 3,000-5,000 acorns one autumn.

Their fondness for acorns and their accuracy in selecting and burying acorns that have not been infested with weevils are credited with spreading oak trees after the last glacial period.

Despite being common, conspicuous birds that have been studied by many researchers, much about Blue Jays remains a mystery. This is the only New World jay that migrates north and south, and large flocks are observed flying over many hawkwatch spots, along shorelines, and at other migration overlooks, but their migration is very poorly understood. Some individuals remain year-round throughout their entire range, and at least some individuals depart during spring throughout their entire range except peninsular Florida. Migrating flocks can include adults and young birds, and recent analyses of movements of banded jays indicate that there is no age difference between jays that migrate and jays that remain resident. The proportion of jays that migrate is probably less than 20 percent.

White or light gray underneath, various shades of blue, black, and white above. 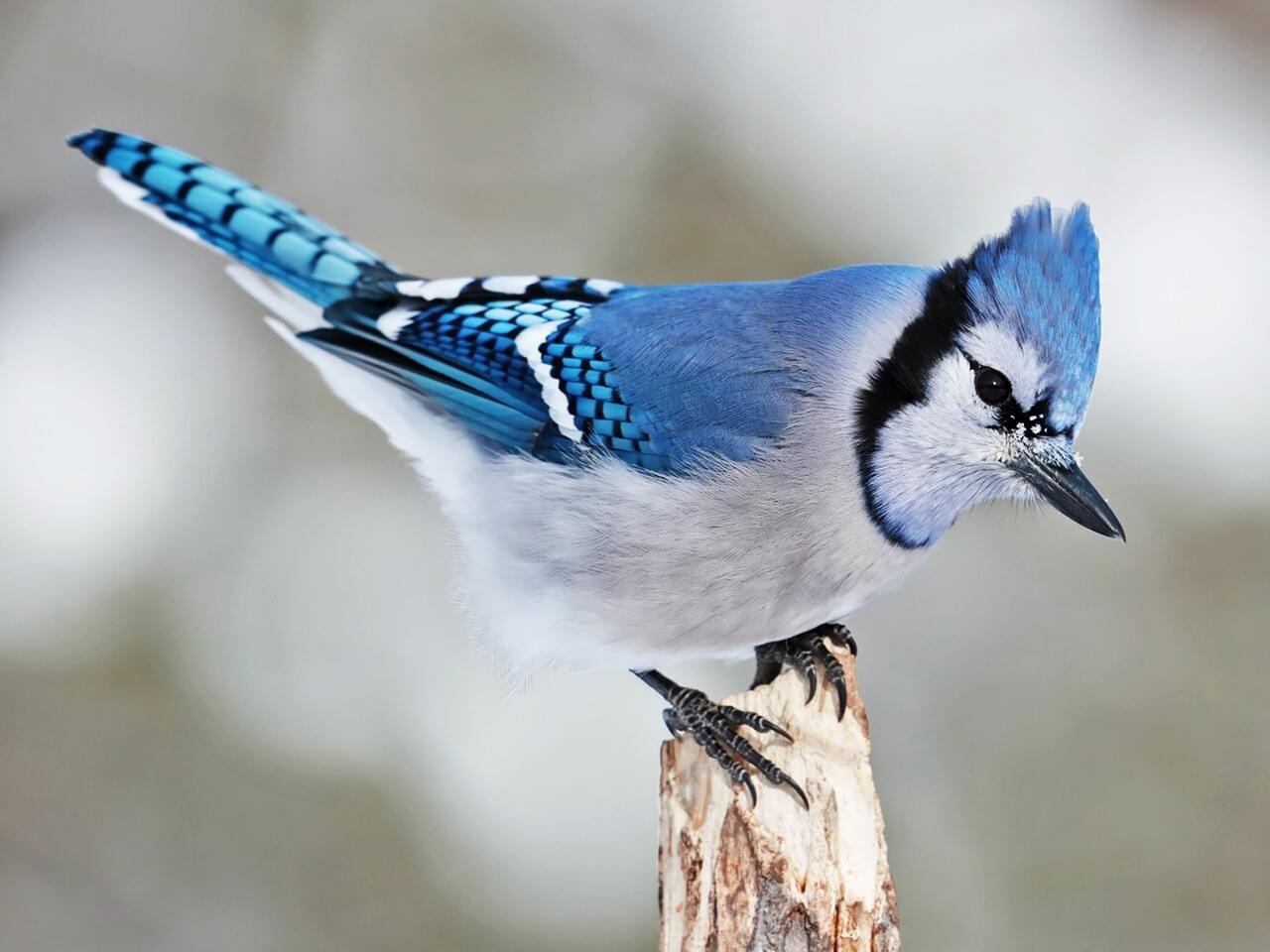 Steller's Jay has less white in the wings and its head and chest are black with much darker underparts. Scrub-jays don't have a crest and have solid blue wings and tail rather than black and white barring.