Northern Flickers are large, brown woodpeckers with a gentle expression and handsome black-scalloped plumage. On walks, don’t be surprised if you scare one up from the ground. It’s not where you’d expect to find a woodpecker, but flickers eat mainly ants and beetles, digging for them with their unusual, slightly curved bill. When they fly you’ll see a flash of color in the wings – yellow if you’re in the East, red if you’re in the West – and a bright white flash on the rump.

Look for Northern Flickers in woodlands, forest edges, and open fields with scattered trees, as well as city parks and suburbs. In the western mountains they occur in most forest types, including burned forests, all the way up to treeline. You can also find them in wet areas such as streamside woods, flooded swamps, and marsh edges.

Northern Flickers eat mainly insects, especially ants and beetles that they gather from the ground. They also eat fruits and seeds, especially in winter. Flickers often go after ants underground (where the nutritious larvae live), hammering at the soil the way other woodpeckers drill into wood. They’ve been seen breaking into cow patties to eat insects living within. Their tongues can dart out 2 inches beyond the end of the bill to snare prey. Other invertebrates eaten include flies, butterflies, moths, and snails. Flickers also eat berries and seeds, especially in winter, including poison oak and ivy, dogwood, sumac, wild cherry and grape, bayberries, hackberries, and elderberries, and sunflower and thistle seeds.

Northern Flickers don’t act like typical woodpeckers. They mainly forage on the ground, sometimes among sparrows and blackbirds. When flushed, flickers often perch erect on thin horizontal branches rather than hitching up or around a tree trunk. Flickers do fly Iike most woodpeckers do, rising and falling smoothly as they intersperse periods of flapping with gliding. Early in spring and summer, rivals may face off in a display sometimes called a “fencing duel,” while a prospective mate looks on. Two birds face each other on a branch, bills pointed upward, and bob their heads in time while drawing a loop or figure-eight pattern in the air, often giving rhythmic wicka calls at the same time.

Both sexes help with nest excavation. The entrance hole is about 3 inches in diameter, and the cavity is 13-16 inches deep. The cavity widens at bottom to make room for eggs and the incubating adult. Inside, the cavity is bare except for a bed of wood chips for the eggs and chicks to rest on. Once nestlings are about 17 days old, they begin clinging to the cavity wall rather than lying on the floor.

Flickers are fairly large woodpeckers with a slim, rounded head, slightly downcurved bill, and long, flared tail that tapers to a point.

Flickers appear brownish overall with a white rump patch that’s conspicuous in flight and often visible when perched. The undersides of the wing and tail feathers are bright yellow, for eastern birds, or red, in western birds. With a closer look you’ll see the brown plumage is richly patterned with black spots, bars, and crescents. 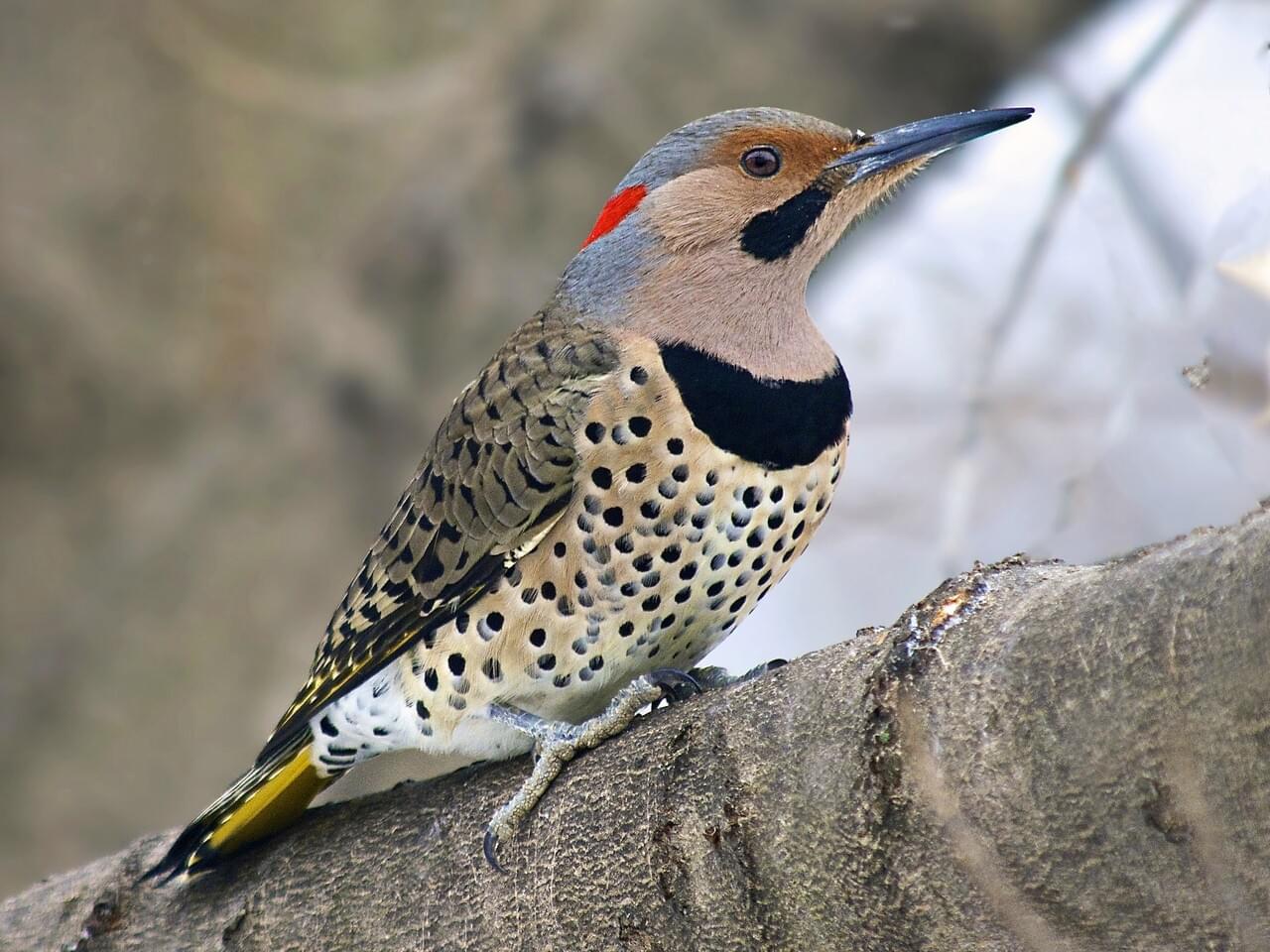 Northern Flickers are browner than Red-bellied Woodpeckers, which have a black-and-white barred back and bright red crown. The Gilded Flicker of southern Arizona looks like a mix between yellow-shafted and red-shafted Northern Flickers: a plain brown crown and gray face paired with yellow shafts to the flight feathers.