First brought to North America by Shakespeare enthusiasts in the nineteenth century, European Starlings are now among the continent’s most numerous songbirds. They are stocky black birds with short tails, triangular wings, and long, pointed bills. Though they’re sometimes resented for their abundance and aggressiveness, they’re still dazzling birds when you get a good look. Covered in white spots during winter, they turn dark and glossy in summer. For much of the year, they wheel through the sky and mob lawns in big, noisy flocks.

Starlings typically live around people, using mowed lawns, city streets, and agricultural fields for feeding; and trees, buildings, and other structures for nesting. Their main requirements are open, grassy areas in which to forage, a water source, and trees or buildings that contain suitable cavities or niches for nesting. They avoid large, unbroken stretches of forest, chaparral, and desert.

Starlings forage in lawns, fields, and other open areas with short vegetation. They wander over the ground, often quite rapidly, poking their closed bill into the ground and using their strong jaw muscles to force open the bill and search for soil insects and other invertebrates. They often forage with other species, including grackles, cowbirds, blackbirds, House Sparrows, Rock Pigeons, American Robins, and American Crows. Watching starlings in flocks can reveal several ways that these gregarious birds communicate with their neighbors. Starlings signal agitation by flicking their wings, or by staring at their opponents while standing erect, fluffing their feathers, and raising the feathers of the head. Submissive birds crouch and move away with their feathers sleeked. Confrontations can escalate into birds charging at each other and stabbing with their long bills. Birds on wires may push others away by sidling along the perch until they’ve run out of room. Males attract mates by singing near a nest site they’ve claimed and flapping their wings in circles at the same time. After they’ve paired, males follow their mates everywhere, chasing off other males. Starlings are extremely aggressive birds that drive other species from nest sites they want to use. Among the species they’ve chased off are Wood Ducks, Buffleheads, Northern Flickers, Great Crested Flycatchers, Tree Swallows, and Eastern Bluebirds.

Male starlings begin building the nest before mating takes place, filling the cavity with grass and pine needles, along with feathers, trash, cloth, and string. There’s a depression near the back of the cavity where the cup is built and lined with feathers, fine bark, leaves, and grass. Females oversee the final arrangements and may discard some of the material the male added. Starlings also add fresh green plants to the nest throughout the nesting period, particularly during laying and incubation. Nests can be built in as little as 1-3 days. Both sexes incubate the eggs.

Starlings are chunky and blackbird-sized, but with short tails and long, slender beaks. In flight their wings are short and pointed, making them look rather like small, four-pointed stars (and giving them their name).

At a distance, starlings look black. In summer they are purplish-green iridescent with yellow beaks; in fresh winter plumage they are brown, covered in brilliant white spots. 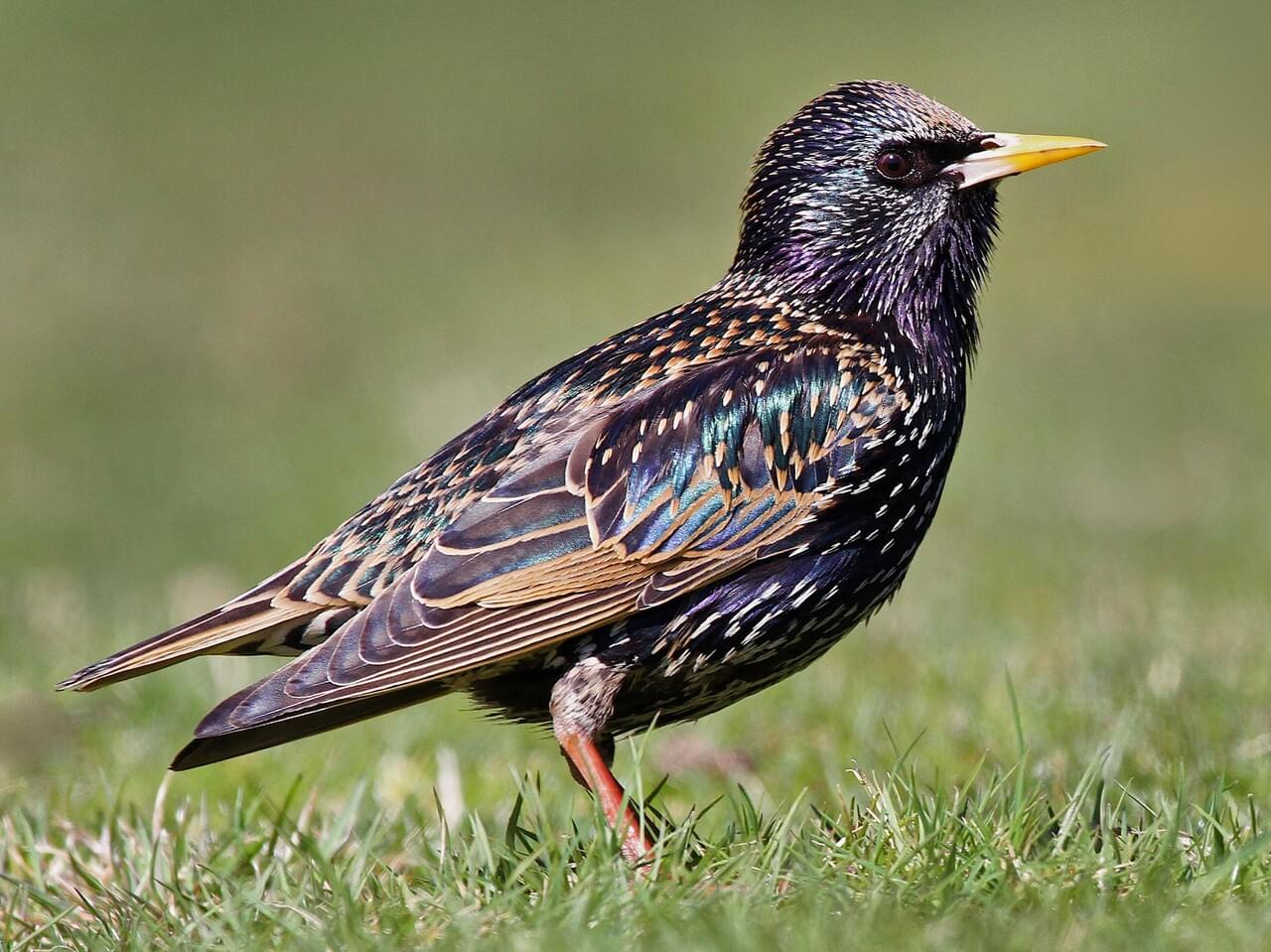 Starlings are a similar size and color to blackbirds, cowbirds, and grackles, but they’re a very different shape. They have much shorter tails, more pointed wings, and the bill is longer, straighter, and thinner. In summer, starlings have yellow bills, which blackbirds never have.