Dark-eyed Juncos are neat, even flashy little sparrows that flit about forest floors of the western mountains and Canada, then flood the rest of North America for winter. They’re easy to recognize by their crisp (though extremely variable) markings and the bright white tail feathers they habitually flash in flight. Dark-eyed Juncos are among the most abundant forest birds of North America. Look for them on woodland walks as well as in flocks at your feeders or on the ground beneath them.

Dark-eyed Juncos breed in forests across much of North America and at elevations ranging from sea level to more than 11,000 feet. They are often found in coniferous forests incuding pine, Douglas-fir, spruce, and fir, but also in deciduous forests such as aspen, cottonwood, oak, maple, and hickory. During winter and on migration they use a wider variety of habitats including open woodlands, fields, roadsides, parks, and gardens.

Dark-eyed Juncos are primarily seed-eaters, with seeds of chickweed, buckwheat, lamb’s quarters, sorrel, and the like making up about 75% of their year-round diet. At feeders they seem to prefer millet over sunflower seeds. During the breeding season, Dark-eyed Juncos also eat insects including beetles, moths, butterflies, caterpillars, ants, wasps, and flies.

When foraging, Dark-eyed Juncos typically hop (rather than walk) on the ground, pecking or scratching at the leaf litter, or flit very low in underbrush gleaning food from twigs and leaves. They sometimes fly up from the ground to catch insects from tree trunks. In flight, they flap continuously and pump their tails so the white outer tail feathers flash; flight is very agile as the bird maneuvers through its tangled environs. Male juncos are very territorial in summer, chasing off intruders in rapid flights accompanied by excited call notes. When males court females, they fan or flick open their wings and tail, hop up and down, and pick up pieces of nest material or moss; females seem to prefer males that show more white in the tail. During winter, Dark-eyed Juncos form fairly large flocks, and where wintering ranges overlap you may find several subspecies in a single flock. Juncos also forage with other sparrows and bluebirds. Junco flocks typically have a hierarchy or pecking order, and earlier arrivals tend to rank higher in the group than later arrivals.

Females build the nests, using her beak to weave together materials and her body to give the nest its shape. Nests can be quite variable depending on where they are built. Sometimes ground nests get just a fine lining of grasses or pine needles. Other nests may be built on a foundation of twigs, leaves and moss, then lined with grasses, ferns, rootlets, hair, and fine pieces of moss. The nests usually take 3-7 days to build, and when finished they are 3-5.5 inches across, with an inner diameter of 2.4-2.8 inches and depth of 1.6-2.8 inches. It’s rare for a junco to reuse a nest.

The Dark-eyed Junco is a medium-sized sparrow with a rounded head, a short, stout bill and a fairly long, conspicuous tail.

Juncos vary across the country (see Regional Differences), but in general they’re dark gray or brown birds brightened up by a pink bill and white outer tail feathers that periodically flash open, particularly in flight. 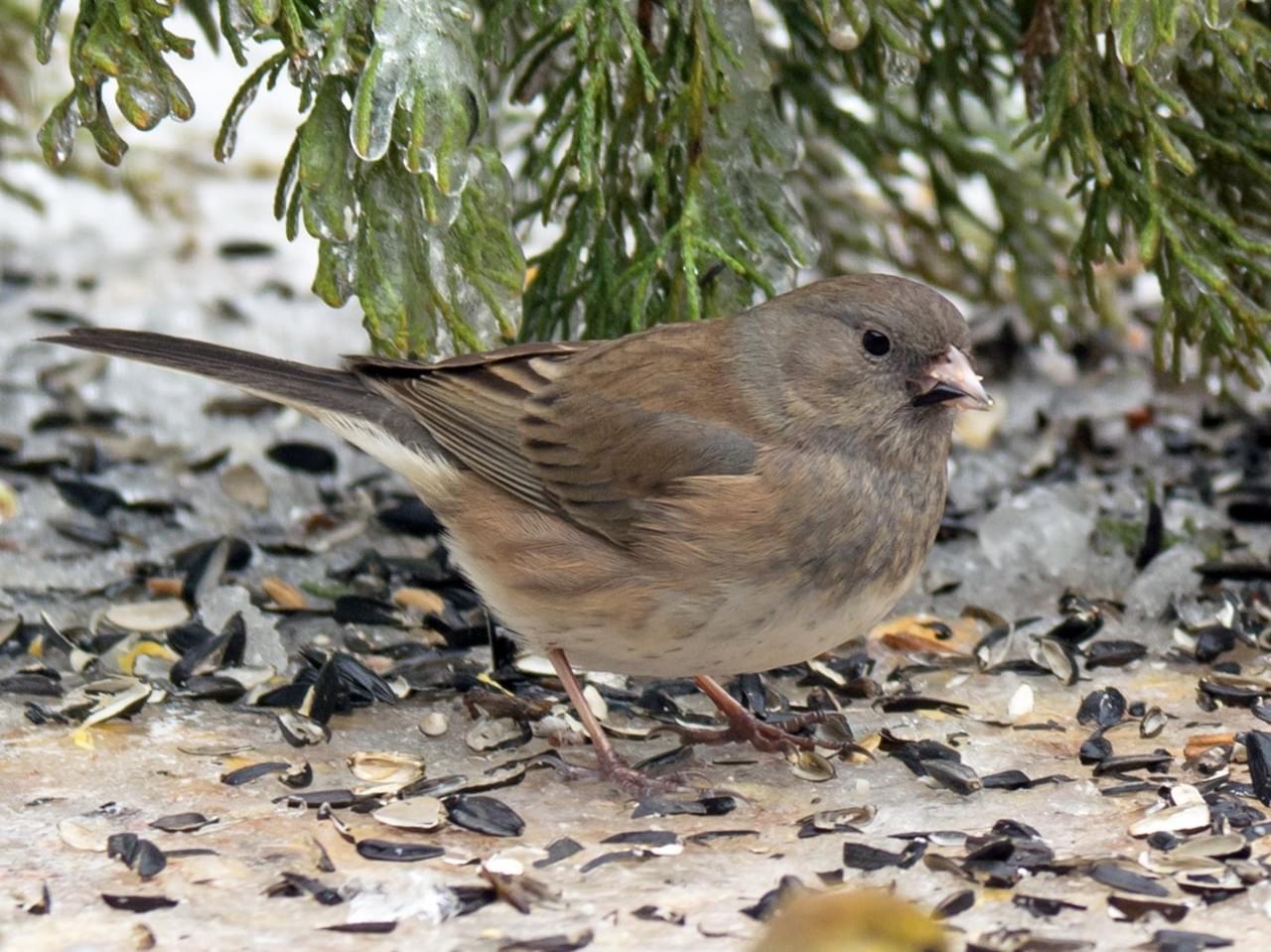 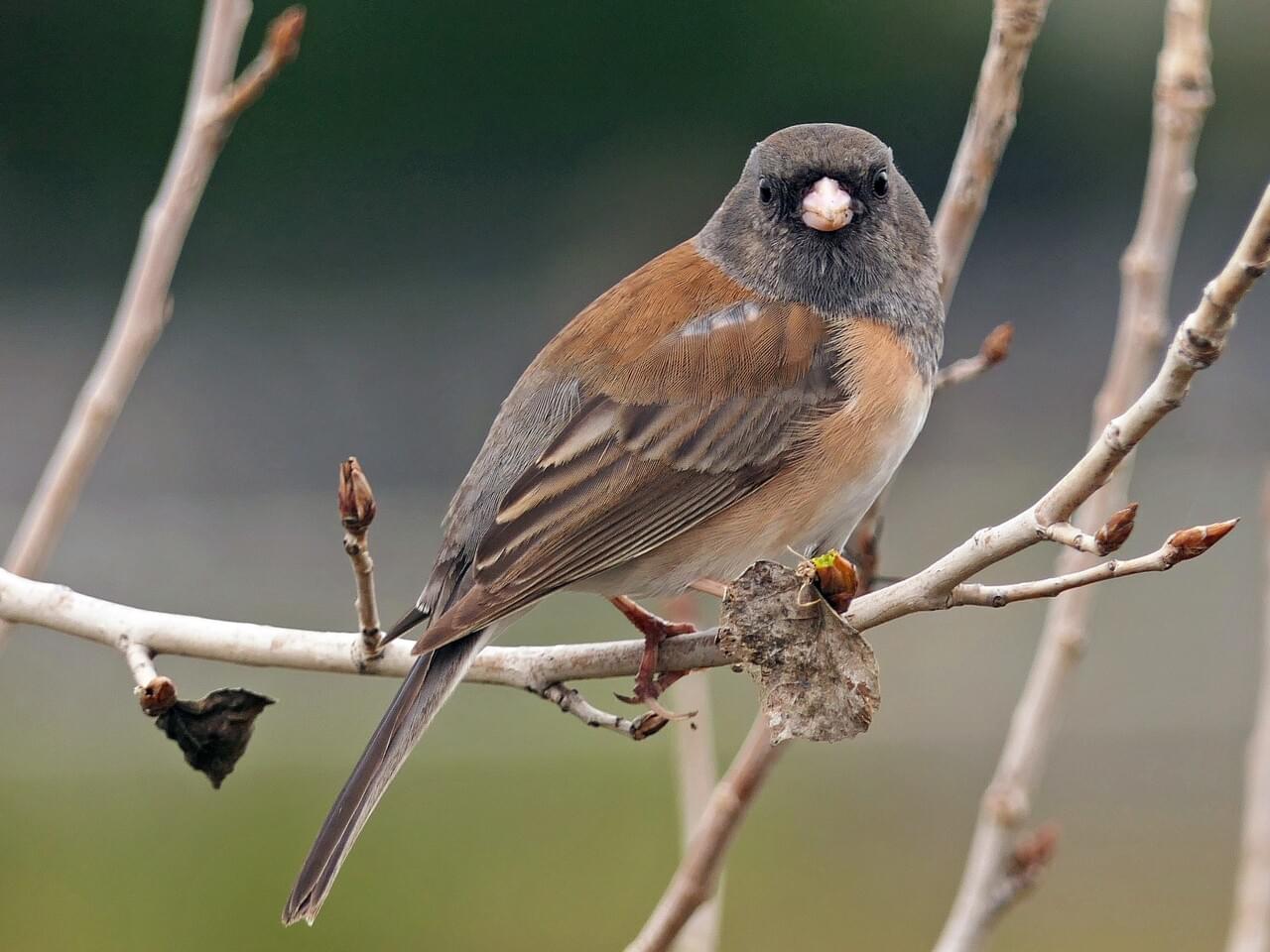 The Yellow-eyed Junco of extreme southern Arizona and New Mexico resembles the red-backed and gray-headed forms of the Dark-eyed Junco, but they have a staring yellow eye and a bill that is black above, yellow below. Beginning bird watchers sometimes get confused by the Black Phoebe, a flycatcher of California and the Southwest. Black Phoebes are colored very similarly to the slate-colored form of the Dark-eyed Junco, but they act very differently: they have a flycatcher's erect posture, large head, and tendency to sit still on exposed perches. Female Spotted Towhees may resemble the Oregon form of Dark-eyed Junco but have the same shade of brown on the head and back and large white spots across the wings and back.