These plump finches dwarf every other finch in the trees and nearly every bird that lands on the feeder. The grayish bodies of Pine Grosbeaks are decked out in pinkish reds on males and yellows on females. They easily crush seeds and nip off tree buds and needles with their thick and stubby bill. They breed in open spruce, fir, and pine forests, but they drop in on feeders in winter, especially in the East when they sometimes irrupt outside of their normal range.

Pine Grosbeaks live in open evergreen forests with spruce, pine, or fir across Canada, in mountainous regions in the West, and in subalpine forests in Eurasia. In the Sierra Nevada in California they occur in open red fir and lodgepole pine forests usually higher than 6,000 feet. In the Rocky Mountains they are most common in valleys near timberline (above 9,000 feet). In the winter they either stay in similar habitat, move to lower elevations, or to areas with abundant mountain ash, maple, and ash fruits and seeds.

Nearly 100% of their diet is made up of buds, seeds, and fruits from spruce, pine, juniper, birch, mountain ash, maple, box elder, crabapple, blackberry, ragweed, and burdock. They forage on the ground or in trees, grabbing seeds and fruits or nipping fresh buds and needles from the tips of branches. Though they are primarily vegetarian they catch insects and spiders in the summer. These protein-rich items are often fed to their growing young along with mixed plant foods. In the winter they also eat grit and salt along roadsides. They frequently visit feeders with black oil sunflower seeds or suet. Grosbeaks drink water or eat snow daily.

In trees Pine Grosbeaks sluggishly hop between braches nipping off the new growth of trees or snatching seeds and fruits. They also hop or walk along the ground when they are searching for fallen seeds or fruits. When boreal tree species produce larger seed crops Pine Grosbeaks often raise more young and are more likely to survive the winter. But when those trees fail to produce seed crops the next season, the now larger population of grosbeaks wanders or irrupts outside of the normal breeding range to find food. During these irruptions they often turn up at bird feeders farther south than normal. In the winter, they forage in groups from 5–15 individuals. In areas where different call types exist, individuals with the same song type stick together; they do not forage with other groups with different flight calls. During the breeding season, they form monogamous pairs. Males sing from treetops to defend their breeding territory. Mated pairs have identical flight calls, which may indicate that they form strong bonds with each other.

The female builds a loose foundation of evergreen twigs into which she weaves roots and smaller twigs. She then builds the inner cup of the nest with rootlets, twigs, and grass. She lines it with lichen, evergreen needles, soft grasses, and feathers. The nest is around 6–9 inches across and 3–4 inches deep on the outside with an inner cup around 2.5–3 inches across.

Immature male usually is indistinguishable from immature or adult female until the second year when it molts and grows new reddish feathers. Some young males have some red or orange feathers in the body plumage, which females apparently lack. Females average duller than males (especially on the crown and rump) and have a lighter russet tinge to the head or lighter olive tinge to the breast than males. The color of the head and body is often golden orange or reddish bronze in males, in contrast to golden yellow of the female, and the chin is often buffier or more brown-gray than in the female. 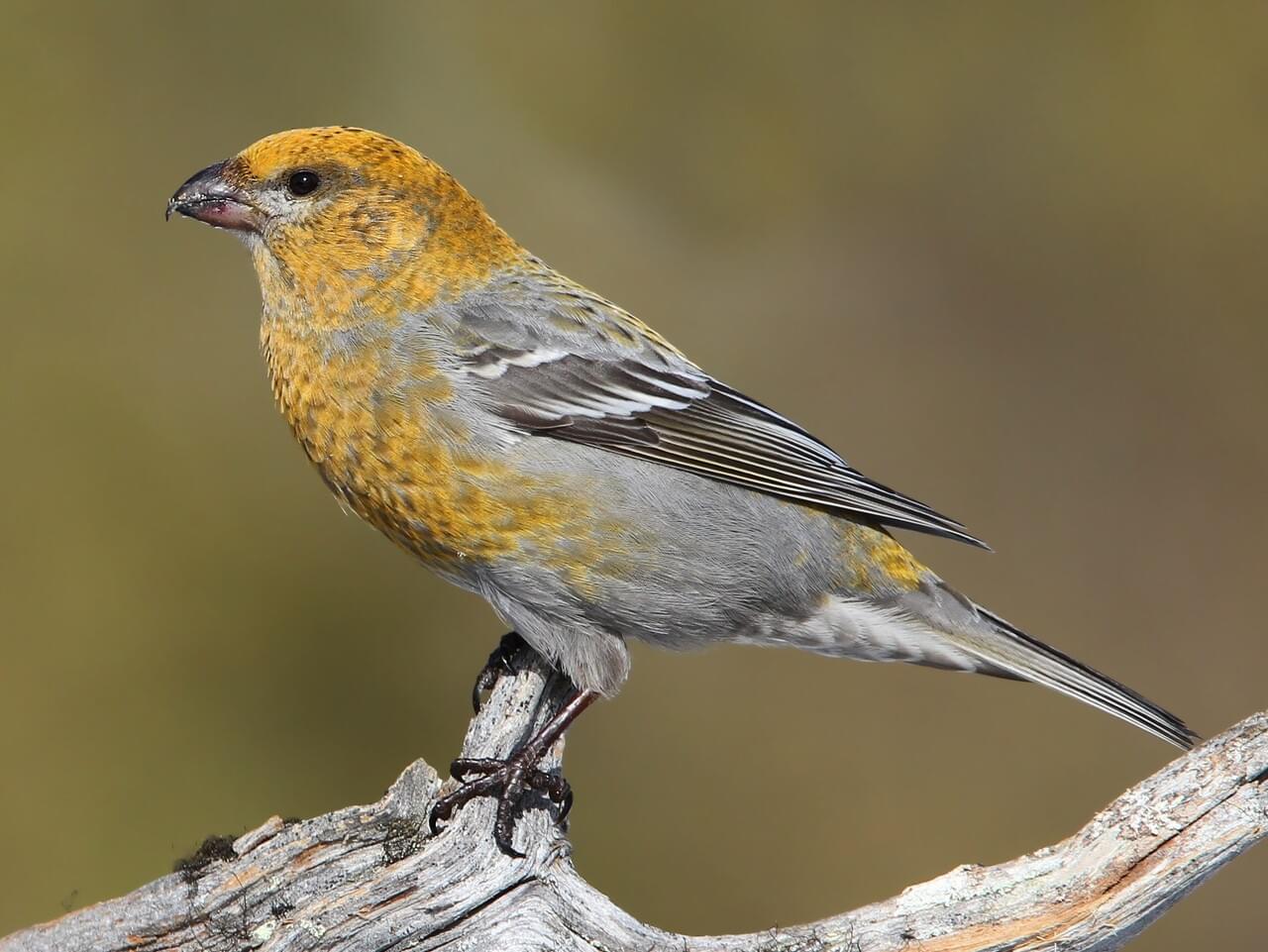 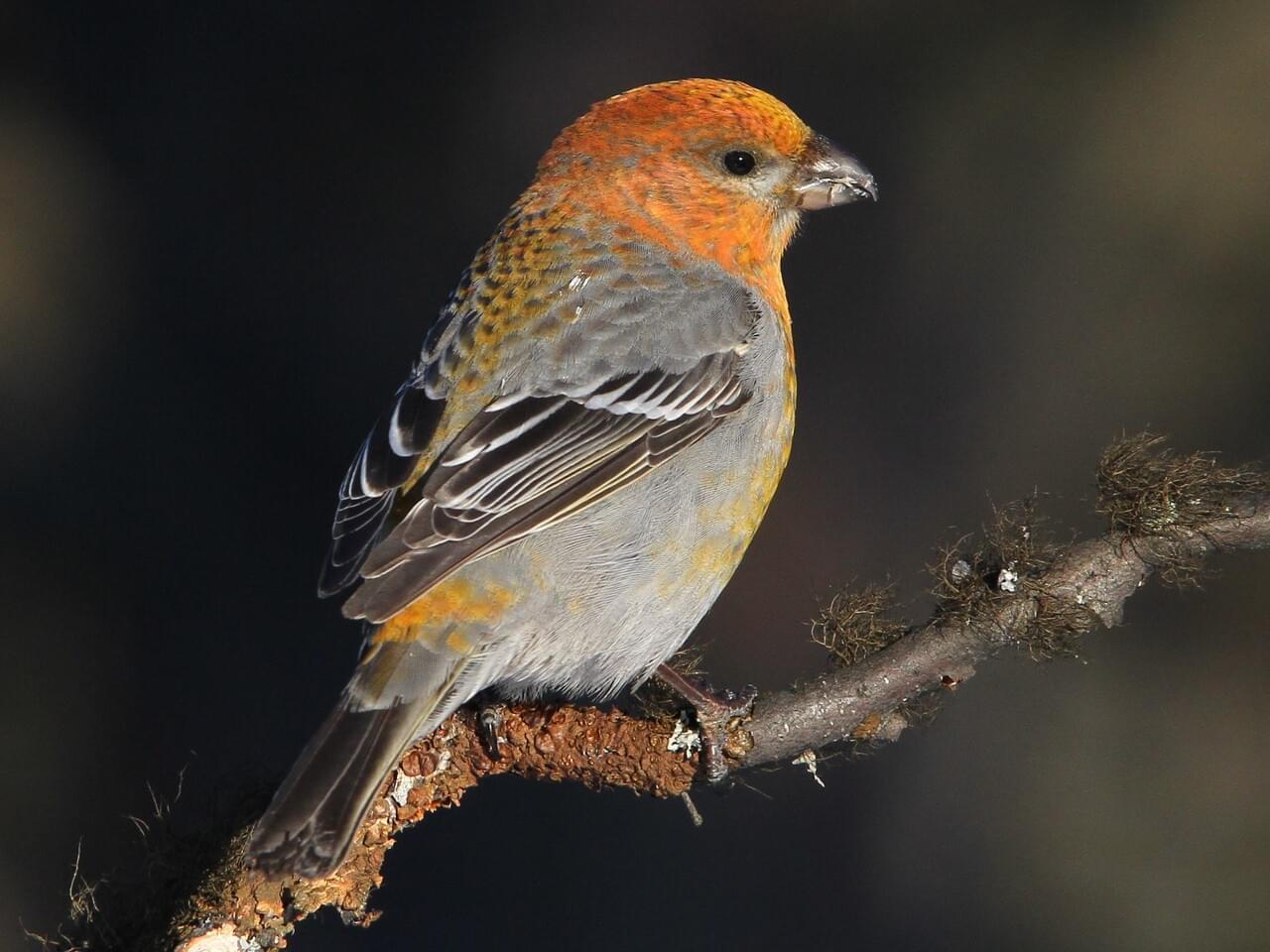