The male Northern Cardinal is perhaps responsible for getting more people to open up a field guide than any other bird. They’re a perfect combination of familiarity, conspicuousness, and style: a shade of red you can’t take your eyes off. Even the brown females sport a sharp crest and warm red accents. Cardinals don’t migrate and they don’t molt into a dull plumage, so they’re still breathtaking in winter’s snowy backyards. In summer, their sweet whistles are one of the first sounds of the morning.

Northern Cardinals hop through low branches and forage on or near the ground. Cardinals commonly sing and preen from a high branch of a shrub. The distinctive crest can be raised and pointed when agitated or lowered and barely visible while resting. You typically see cardinals moving around in pairs during the breeding season, but in fall and winter they can form fairly large flocks of a dozen to several dozen birds. During foraging, young birds give way to adults and females tend to give way to males. Cardinals sometimes forage with other species, including Dark-eyed Juncos, White-throated Sparrows, other sparrow species, Tufted Titmice, goldfinches, and Pyrrhuloxias. They fly somewhat reluctantly on their short, round wings, taking short trips between thickets while foraging. Pairs may stay together throughout winter, but up to 20 percent of pairs split up by the next season.

Males sometimes bring nest material to the female, who does most of the building. She crushes twigs with her beak until they’re pliable, then turns in the nest to bend the twigs around her body and push them into a cup shape with her feet. The cup has four layers: coarse twigs (and sometimes bits of trash) covered in a leafy mat, then lined with grapevine bark and finally grasses, stems, rootlets, and pine needles. The nest typically takes 3 to 9 days to build; the finished product is 2-3 inches tall, 4 inches across, with an inner diameter of about 3 inches. Cardinals usually don’t use their nests more than once.

The Northern Cardinal is a fairly large, long-tailed songbird with a short, very thick bill and a prominent crest. Cardinals often sit with a hunched-over posture and with the tail pointed straight down.

Male cardinals are brilliant red all over, with a reddish bill and black face immediately around the bill. Females are pale brown overall with warm reddish tinges in the wings, tail, and crest. They have the same black face and red-orange bill. 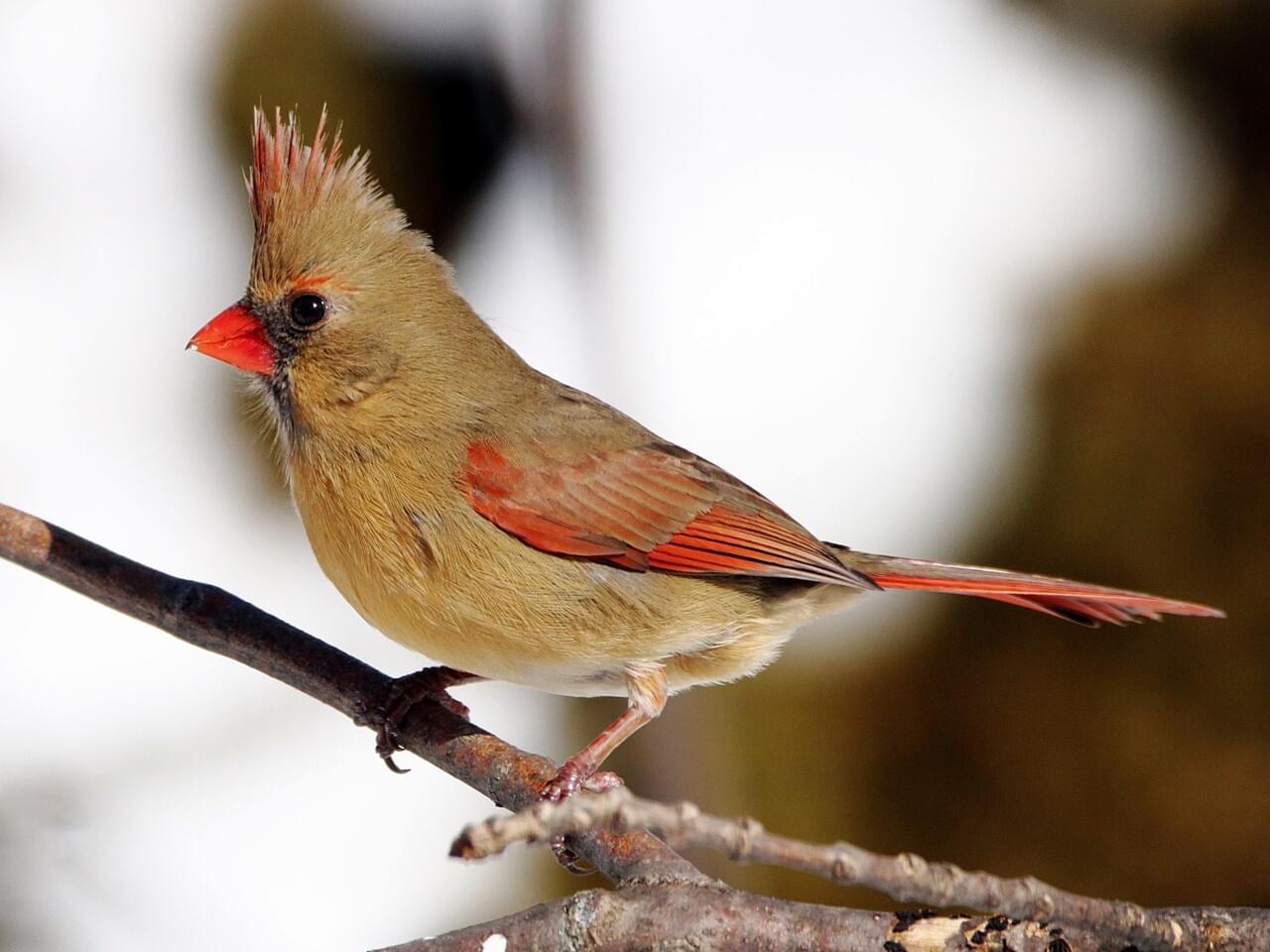 Pyrrhuloxias are grayer than female Northern Cardinals and have a more rounded, yellow bill without the black face. Female Phainopeplas lack any redness to their plumage and have much more slender bills. Male Scarlet Tanagers have jet-black wings. Male Summer Tanagers lack the male cardinal's crest and have a longer, straighter bill. Canyon, California and Abert's towhees lack the female cardinal's reddish tinges as well as its crest.