Flocks of tiny Pine Siskins may monopolize your thistle feeder one winter and be absent the next. This nomadic finch ranges widely and erratically across the continent each winter in response to seed crops. Better suited to clinging to branch tips than to hopping along the ground, these brown-streaked acrobats flash yellow wing markings as they flutter while feeding or as they explode into flight. Flocks are gregarious, and you may hear their insistent wheezy twitters before you see them.

Pine Siskins generally nest in open coniferous or mixed forests, but also inhabit parks, cemeteries, and suburban woodlands, where they breed in ornamental conifers or deciduous trees. While they favor feeding in open forest canopies where cone seeds are abundant, they'll forage in habitats as diverse as deciduous forests and thickets, meadows, grasslands, weedy fields, roadsides, chaparral, and backyard gardens and lawns. They flock to backyard feeders offering small seeds. Mineral deposits can lure them to otherwise unattractive habitats like winter road beds that are salted to melt snow and ice.

As their name suggests, Pine Siskins have a fondness for the seeds of pines and other conifers like cedars, larch, hemlock, and spruce. They also feed on deciduous seeds like alder, birch, sweetgum, and maples. They eat the young buds of willows, elms, and maples, and the soft stems and leaves of weeds and even young garden vegetables. They'll glean the seeds of grasses, dandelions, chickweed, sunflowers, and ragweed. They forage for insects, spiders, and grubs from leaves and branch tips, and occasionally take insects from the air. Pine Siskins feed readily at backyard feeders, preferring smaller seeds without tough shells like thistle and oil sunflower, but they will scavenge fragments of larger seeds left by heavier-billed birds, and will occasionally eat suet. They also feed on mineral deposits, including ashes, road salt, and fresh cement. They have been seen drinking from sapwells drilled by sapsuckers.

Pine Siskins flit about in the topmost canopy of seed-bearing trees. They'll often cling upside down to branch tips to empty hanging cones of their seeds. Abundant seeds or tender shoots lure them to the ground to feed. Gregarious flocks are constantly atwitter with wheezy contact calls while feeding or during their undulating flight. Unusually convivial and unterritorial, they sometimes nest in loose colonies, continuing to forage in flocks away from the nests. Males sing from high perches and during circular courtship flights. Pairs may visit other pairs' nests before and after brooding. During brooding, the female stays on the nest and the male feeds her. Winter flocks and individuals can be aggressive around food sources, challenging competitors by lowering their heads, spreading their wings and tail, and making faint threatening call notes. Aggressive lunges are the next step and may result in fights that can carry competing siskins several meters into the air. Opportunistic Pine Siskins may forage close to heavier-beaked birds, gleaning fragments of larger seeds they can't crack themselves. And they'll hop on the downy seed heads of dandelions, trapping them on the ground for easy picking. Pine Siskins sometimes migrate in flocks of several thousand.

Over the course of 5 or 6 days, the female builds a shallow saucer of twigs, grasses, leaves, weed stems, rootlets, bark strips, and lichens, 2.5–6 inches across. The male, who stays close, may contribute nest material as well. The female lines the 1 to 2.5-inch inner cup (up to 2 inches deep) with fur, feathers, grass, moss, or thistle down. She may complete the nest several days before egg-laying. Nests are only loosely attached to branches and can be vulnerable to gusty winds.

Pine Siskins are very small songbirds with sharp, pointed bills and short, notched tails. Their uniquely shaped bill is more slender than that of most finches. In flight, look for their forked tails and pointed wingtips.

Pine siskins are brown and very streaky birds with subtle yellow edgings on wings and tails. Flashes of yellow can erupt as they take flight, flutter at branch tips, or display during mating. 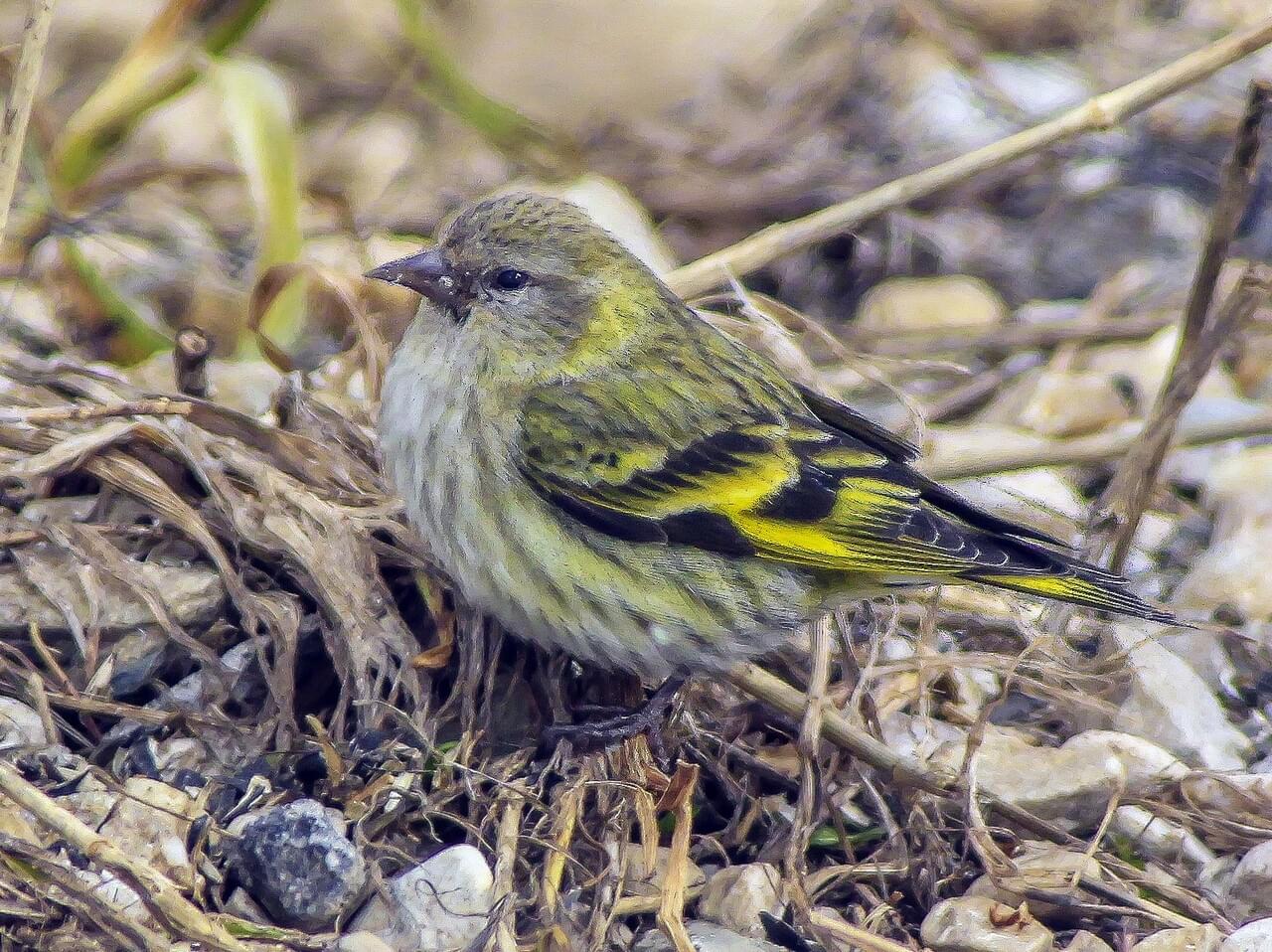