North America’s littlest falcon, the American Kestrel packs a predator’s fierce intensity into its small body. It's one of the most colorful of all raptors: the male’s slate-blue head and wings contrast elegantly with his rusty-red back and tail; the female has the same warm reddish on her wings, back, and tail. Hunting for insects and other small prey in open territory, kestrels perch on wires or poles, or hover facing into the wind, flapping and adjusting their long tails to stay in place. Kestrels are declining in parts of their range; you can help them by putting up nest boxes.

American Kestrels favor open areas with short ground vegetation and sparse trees. You’ll find them in meadows, grasslands, deserts, parks, farm fields, cities, and suburbs. The southeastern U.S. form breeds in unusual longleaf pine sandhill habitat. When breeding, kestrels need access to at least a few trees or structures that provide appropriate nesting cavities. American Kestrels are attracted to many habitats modified by humans, including pastures and parkland, and are often found near areas of human activity including towns and cities.

American Kestrels normally hunt by day. You may see a kestrel scanning for prey from the same perch all day long—or changing perches every few minutes. A kestrel pounces on its prey, seizing it with one or both feet; the bird may finish off a small meal right there on the ground, or carry larger prey back to a perch. During breeding season, males advertise their territory by repeatedly climbing and then diving, uttering a short series of klee! calls at the top of each ascent. Courting pairs may exchange gifts of food; usually the male feeds the female. Early in the pairing-up process, groups of four or five birds may congregate. You may see American Kestrels harassing larger hawks and eagles during migration, and attacking hawks in their territories during breeding season. Kestrels compete over the limited supply of nesting cavities with other cavity-nesters, and sometimes successfully fight off or evict bluebirds, Northern Flickers, small squirrels, and other competitors from their chosen sites.

American Kestrels do not use nesting materials. If the cavity floor is composed of loose material, the female hollows out a shallow depression there.

The slender American Kestrel is roughly the size and shape of a Mourning Dove, although it has a larger head; longer, narrow wings; and long, square-tipped tail. In flight, the wings are often bent and the wingtips swept back.

American Kestrels are pale when seen from below and warm, rusty brown spotted with black above, with a black band near the tip of the tail. Males have slate-blue wings; females’ wings are reddish brown. Both sexes have pairs of black vertical slashes on the sides of their pale faces—sometimes called a “mustache” and a “sideburn." 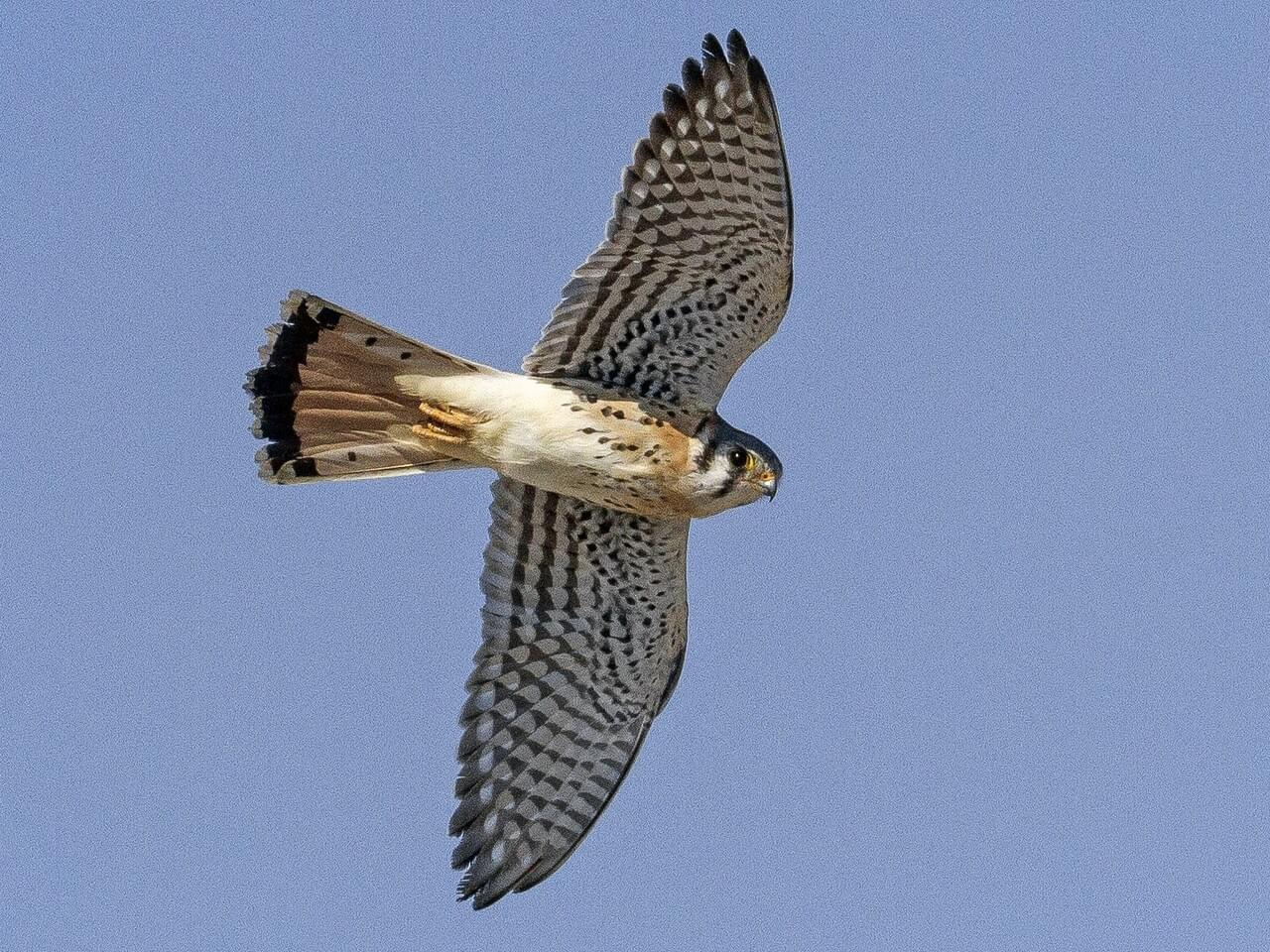 Merlin is a slightly larger, stockier, darker brown version of the American Kestrel—similar in size but quite different in flight style and attitude. Merlins target larger prey, particularly shorebirds and other small to medium-sized birds, which they often chase on the wing. American Kestrels leave such large prey alone. Merlins have a snappier flight style, and looks like a powerhouse with strong, near-constant wingbeats. Sharp-shinned Hawk is roughly kestrel-sized, but it's an accipiter—it has broader wings, a longer tail, and is thicker through the chest. Sharp-shinned Hawks have heavier markings below and are not as warm red-brown on the back; they also hunt in more heavily wooded areas than kestrels. One species frequently confused with kestrels isn't even a raptor. Mourning Doves occupy the same habitats as kestrels and often sit on telephone wires. They have much smaller heads than kestrels and their tails are slender and pointed. In flight, Mourning Doves tend to fly fast and in straight lines, with nearly continuous wingbeats.