With a flash of white tail feathers and a flurry of dark-tipped wings, the Eurasian Collared-Dove settles onto phone wires and fence posts to give its rhythmic three-parted coo. This chunky relative of the Mourning Dove gets its name from the black half-collar at the nape of the neck. A few Eurasian Collared-Doves were introduced to the Bahamas in the 1970s. They made their way to Florida by the 1980s and then rapidly colonized most of North America.

Eurasian Collared-Doves are found throughout much of North America in urban and suburban settings with access to bird feeders and other seed sources. In agricultural areas they seek open sites where grain is available, including farmyards, fields, and areas around silos. Though evidence is mixed, they appear to avoid areas with heavy forest cover or extremely cold temperatures, which may help explain their absence from the Northeast.

Eurasian Collared-Doves eat mainly seed and cereal grain such as millet, sunflower, milo, wheat, and corn. They also eat some berries and green parts of plants, as well as invertebrates.

Eurasian Collared-Doves roost on utility poles, wires, and tall trees in open areas near feeding sites. Mainly ground foragers, they peck at grain and seeds scattered beneath backyard feeders and on feeding platforms, or spilled at farmyards. Flocks of 10 to several hundred doves may gather at prime spots. Although they can feed peacefully in mixed flocks, Eurasian Collared-Doves will also chase off other birds, including Mourning Doves, cardinals, and Blue Jays. The male advertises for a mate with an insistent koo-KOO-kook call from a high perch, repeating the call up to a dozen times in a bout, sometimes starting before dawn and continuing into the night. Calls are followed by a flight display in which the male flies steeply upward, clapping his wings, then descends with tail spread, often spiraling down to the same or a nearby perch. Once a pair has formed, males show females potential nest sites, usually in tall trees but occasionally on buildings. In between these “site visits” the pair vigorously preen each other. Male doves bring females sticks and other material for the simple nest, and aggressively chase away other collared-doves, as well as predators—venture too close and you risk getting hit by a flapping wing. The monogamous pair may raise up to six broods a year; the female can lay a new clutch while young are still in a previous nest.

The male dove brings the female twigs, grasses, roots and other nesting materials, which he sometimes pushes directly under her. Over 1 to 3 days she builds a simple platform nest, which may include feathers, wool, string and wire. A pair often uses the same nest for multiple broods during the year, and may renovate old nests.

Eurasian Collared-Doves have plump bodies, small heads, and long tails. They’re larger than Mourning Doves but slimmer and longer-tailed than a Rock Pigeon. The wings are broad and slightly rounded. The broad tail is squared off at the tip, rather than pointed like a Mourning Dove’s.

Eurasian Collared-Doves are chalky light brown to gray-buff birds with broad white patches in the tail. The bird’s collar is a narrow black crescent around the nape of the neck. In flight and when perched, the wingtips are darker than the rest of the wing. 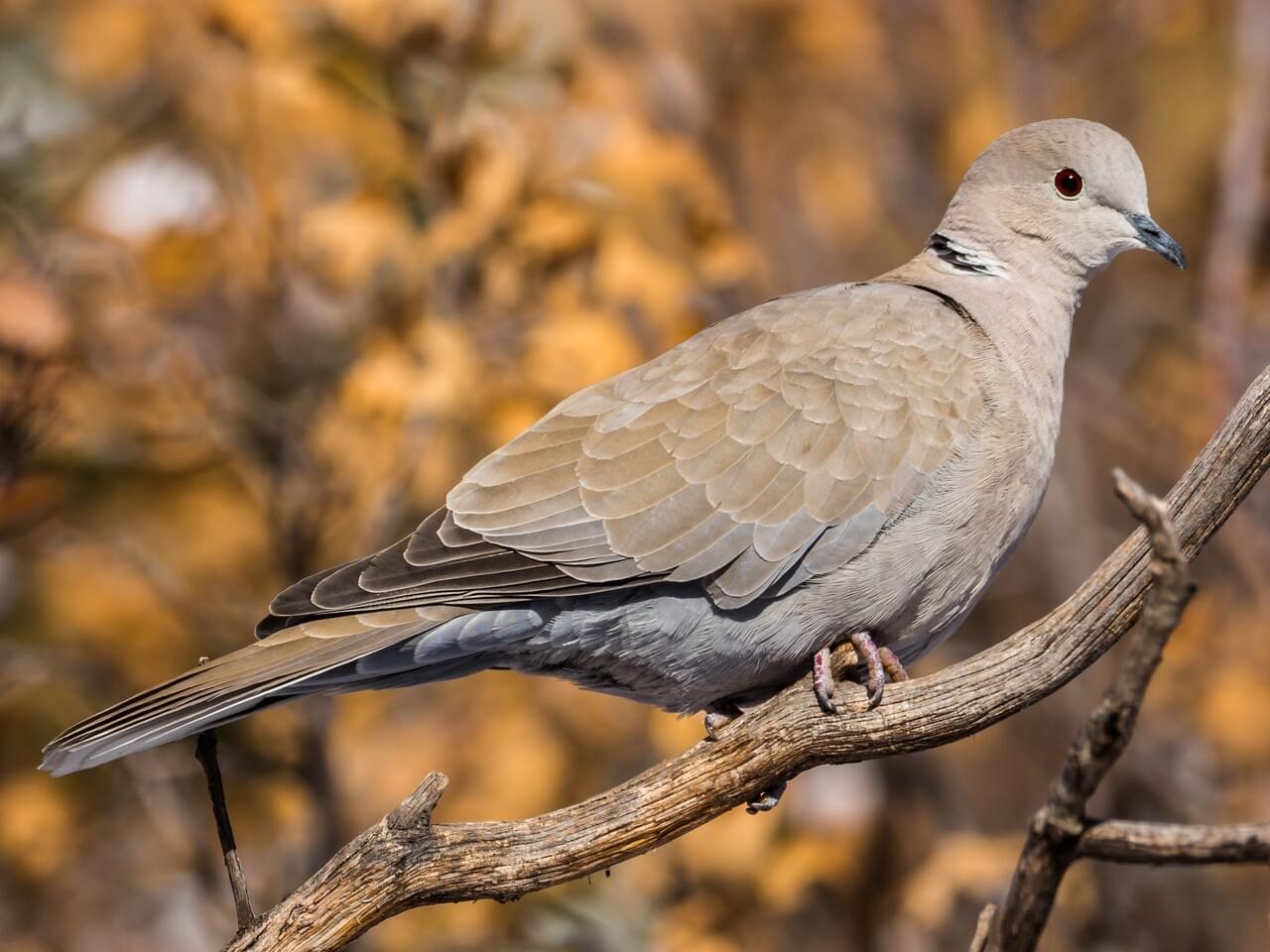