A treat to find in your binocular viewfield, the Cedar Waxwing is a silky, shiny collection of brown, gray, and lemon-yellow, accented with a subdued crest, rakish black mask, and brilliant-red wax droplets on the wing feathers. In fall these birds gather by the hundreds to eat berries, filling the air with their high, thin, whistles. In summer you’re as likely to find them flitting about over rivers in pursuit of flying insects, where they show off dazzling aeronautics for a forest bird.

Cedar Waxwings inhabit deciduous, coniferous, and mixed woodlands, particularly areas along streams. You may also find them in old fields, grasslands, sagebrush, and even along desert washes. With the spread of ornamental berry trees in landscaping, Cedar Waxwings are increasingly common in towns and suburbs. In winter, Cedar Waxwings are most abundant around fruiting plants in open woodlands, parks, gardens, forest edges, and second-growth forests. Birds that winter in the tropics tend to inhabit highlands.

Cedar Waxwings feed mainly on fruits year-round. In summer, they feed on fruits such as serviceberry, strawberry, mulberry, dogwood, and raspberries. The birds’ name derives from their appetite for cedar berries in winter; they also eat mistletoe, madrone, juniper, mountain ash, honeysuckle, crabapple, hawthorn, and Russian olive fruits. In summer Cedar Waxwings supplement their fruit diet with protein-rich insects including mayflies, dragonflies, and stoneflies, often caught on the wing. They also pick items such as scale insects, spruce budworm, and leaf beetles directly from vegetation.

Cedar Waxwings are social birds that form large flocks and often nest in loose clusters of a dozen or so nests. When feeding on fruits, Cedar Waxwings pluck them one by one and swallow the entire thing at once. They typically feed while perched on a twig, but they’re also good at grabbing berries while hovering briefly just below a bunch. When eating insects, waxwings either fly out from an exposed perch, or make long, zig-zagging flights over water. During courtship, males and females hop towards each other, alternating back and forth and sometimes touching their bills together. Males often pass a small item like a fruit, insect, or flower petal, to the female. After taking the fruit, the female usually hops away and then returns giving back the item to the male. They repeat this a few times until, typically, the female eats the gift. Cedar Waxwings have a strong, steady flight style with fairly constant wingbeats.

Female waxwings do almost all the nest building; males may do some construction for the second nest of a season. The female weaves twigs, grasses, cattail down, blossoms, string, horsehair, and similar materials into a bulky cup about 5 inches across and 3 inches high. She lines this cup with fine roots, grasses, and pine needles and may decorate the outside with fruiting grasses or oak and hickory catkins. Construction takes 5 to 6 days and may require more than 2,500 individual trips to the nest. Waxwings occasionally save time by taking nest materials from other birds’ nests, including Eastern Kingbirds, Yellow-throated Vireos, orioles, robins, and Yellow Warblers.

The Cedar Waxwing is a medium-sized, sleek bird with a large head, short neck, and short, wide bill. Waxwings have a crest that often lies flat and droops over the back of the head. The wings are broad and pointed, like a starling’s. The tail is fairly short and square-tipped.

Cedar Waxwings are pale brown on the head and chest fading to soft gray on the wings. The belly is pale yellow, and the tail is gray with a bright yellow tip. The face has a narrow black mask neatly outlined in white. The red waxy tips to the wing feathers are not always easy to see. 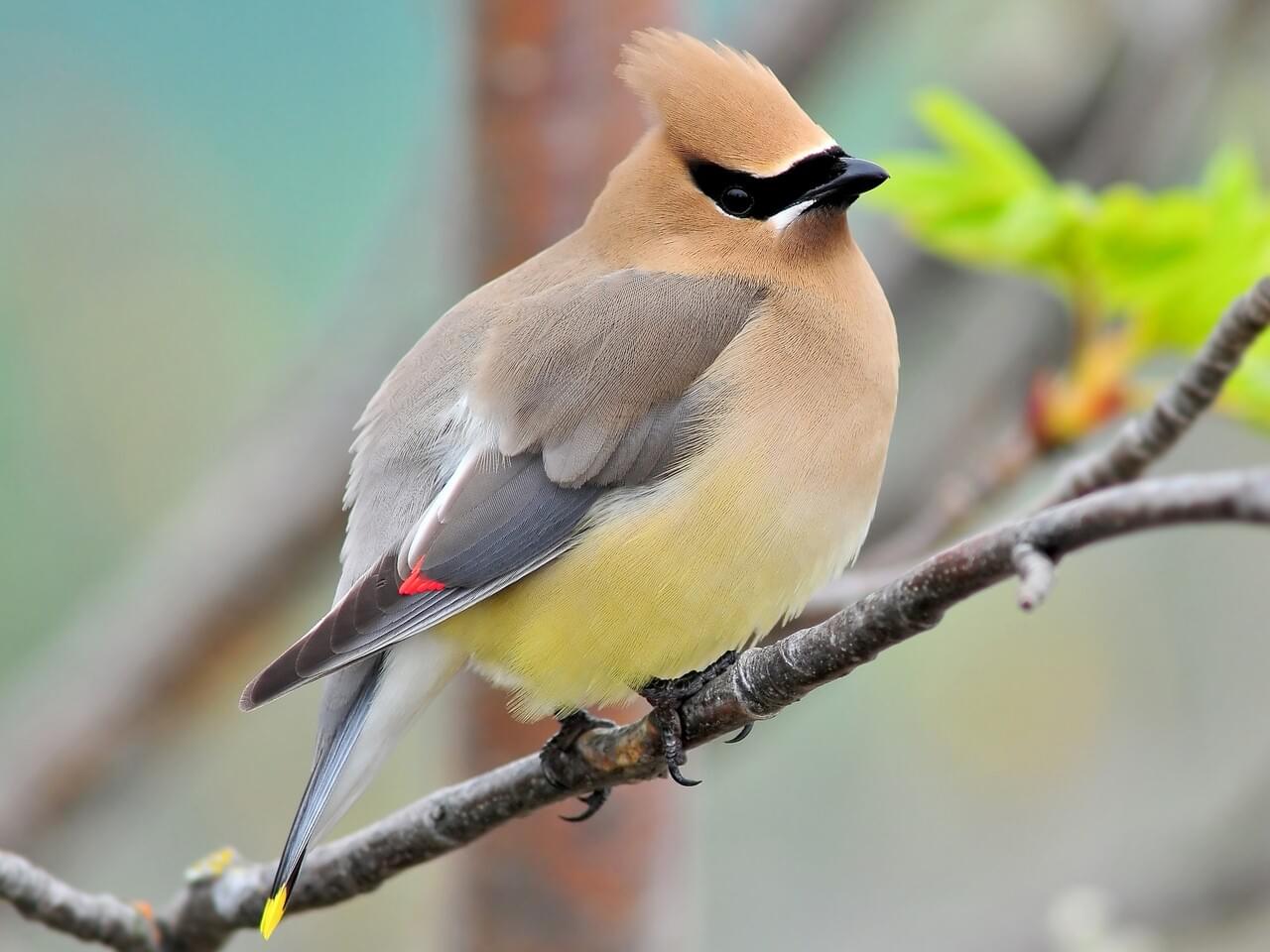 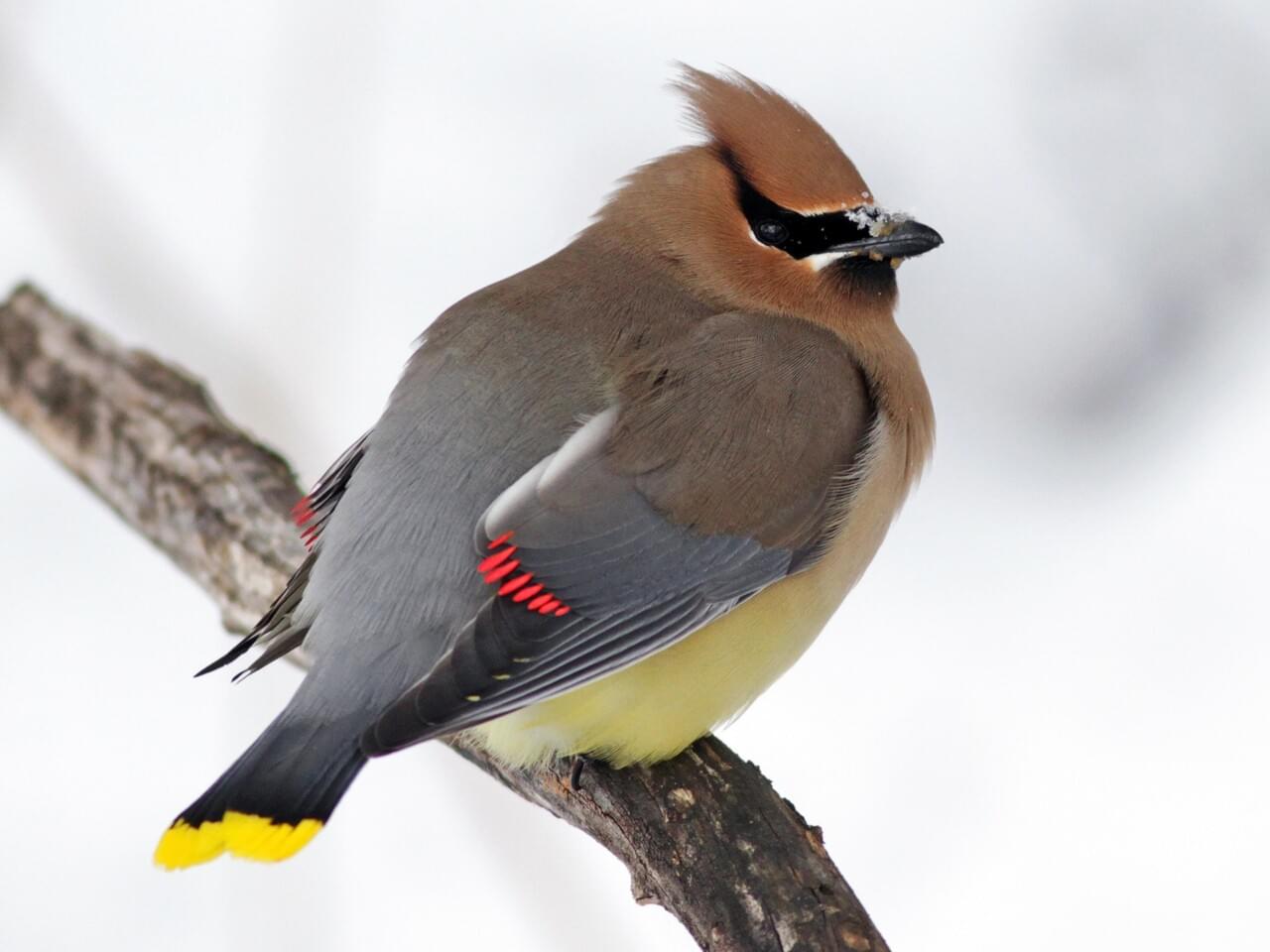 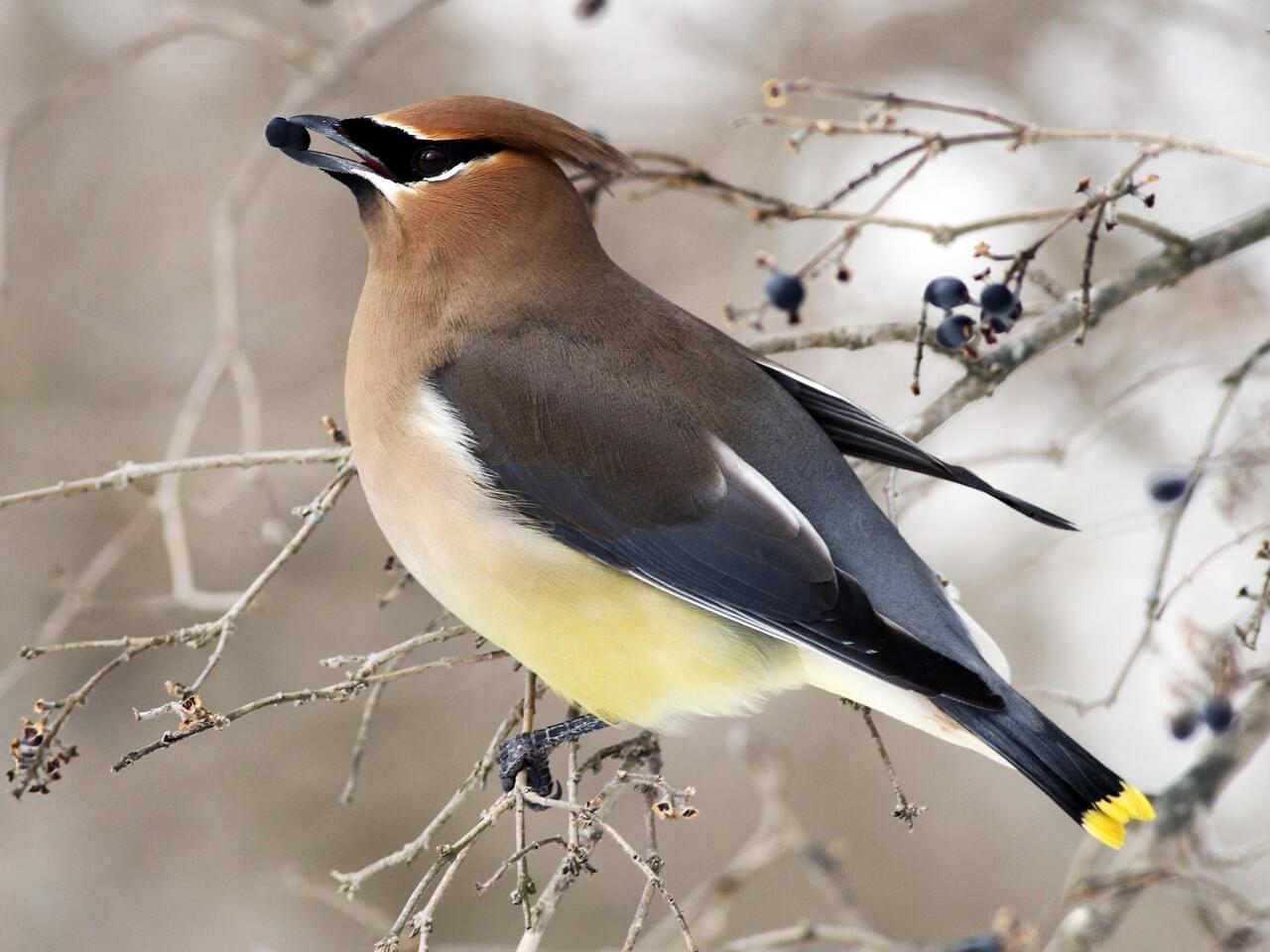 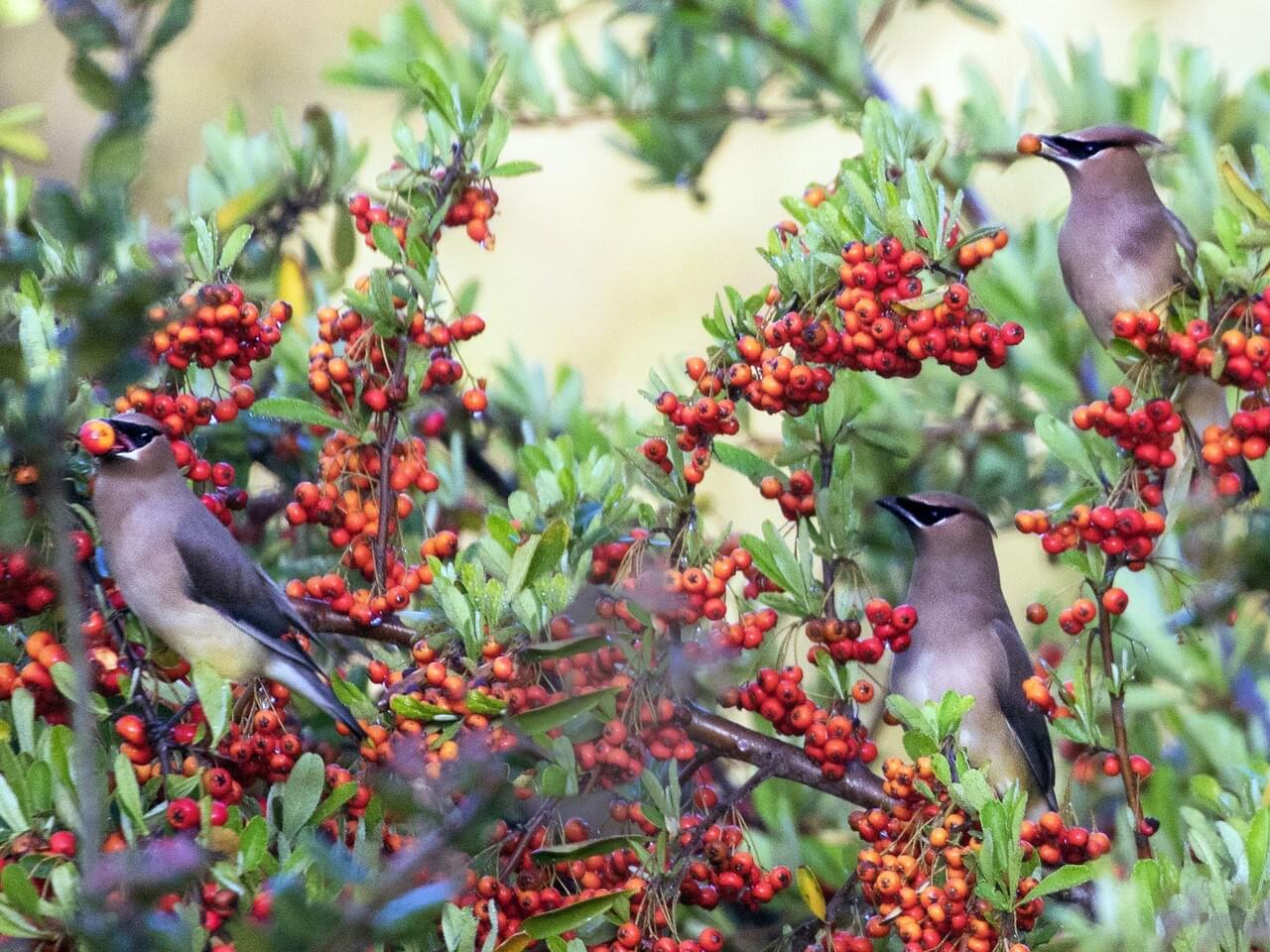