Nimble canopy-gleaners of open woodlands in the western U.S., Bullock's Orioles dangle upside down from branches while foraging and weaving their remarkable hanging nests. Adult males are flame-orange with a neat line through the eye and a white wing patch; females are washed in gray and orange. In addition to insects, they eat fruit and nectar—a trait some bird watchers capitalize on by offering nectar, jelly, and orange halves in summer backyards. Listen for their whistling, chuckling song in tall trees along rivers and streams.

Bullock's Orioles breed in riparian and open woodlands, including urban parks. They favor areas where the trees are large and spaced well apart or in isolated clumps. They often nest in sycamores, cottonwoods, willows, deciduous oaks, madrones, and large mesquite trees. Live oaks, pecans, orchard trees, saltcedar and occasionally conifers are also used. This bird gravitates toward larger trees than those used by the Orchard Oriole. They use similar open woodland habitats during migration and winter, and may also be found in pine, pine-oak, or fir forests.

Bullock's Orioles eat insects and other arthropods, as well as fruit and nectar. They glean insects from leaves, branches and trunks; they also pluck insects from spiderwebs or from the air, and take ripe fruit from bushes and trees. Bullock's Orioles use a method called "gaping" to extract juice from fruit, and also sometimes from tough-skinned caterpillars. Thrusting their closed bills through the skin and into the flesh of the fruit or animal, they then pry their bills open inside and lap up the pooling juices with their brushy tongues. Sometimes these orioles skin caterpillar prey by hitting it repeatedly on a branch. Before eating honeybees, they extract and drop the stinger. Common prey insects include caterpillars, grasshoppers, and crickets. The birds also take beetles, ants, bugs, scale insects, stinkbugs, leafhoppers, treehoppers, and small spiders. Rarely, they eat small lizards. They take nectar from agaves, introduced eucalyptus, and other flowers. Commonly consumed fruits include blackberries, raspberries, cherries, and figs. Nestlings are fed crickets, stick insects, camel crickets, cicadas, moth and butterfly pupae, earwigs, ants, and crane flies.

Bullock's Orioles glean and probe in trees for insects and nectar, often hanging upside down for extended periods. They make short hops from branch to branch, sometimes flying to the ground to nab insects. Their flight is strong and direct. During migration, they congregate in small, loose, mixed-gender flocks. The male performs a bowing courtship display, hopping from branch to branch and bowing to the female every second or so—all the while singing loudly and exposing his colorful plumage. During nest-building and border disputes, the female may display with quivering wings, holding her body in a roughly horizontal position. Rival males face off at territorial borders and chase each other through tree branches. Bullock's Orioles remain paired up throughout the breeding season but may take new mates in later years. Both members of a pair guard the nest and may mob squirrels, crows, jays, and other predators. Females tend to sing near the nest site, while males often sing elsewhere.

The female usually weaves the nest, but the male may assist, with one partner working on the inside and other outside, bringing nest material. The project can take up to 15 days to complete. The nest is gourd-shaped and neatly woven from fibers such as hair, twine, grasses, or wool. It's lined with soft materials such as feathers or the "cotton" from cottonwoods or willows. Nest depth varies, averaging a bit less than 4 inches and ranging up to 15 inches. On average, Bullock's Oriole nests are deeper and wider than those of the Baltimore Oriole, though the opening diameter is smaller.

Pale grayish brownish to yellowish upperparts, with indistinct dark streaking, but without black. Yellowish or dull greenish gray underparts, becoming paler on belly. Throat often with some black. Wings gray-brown, with one or two indistinct wingbars. 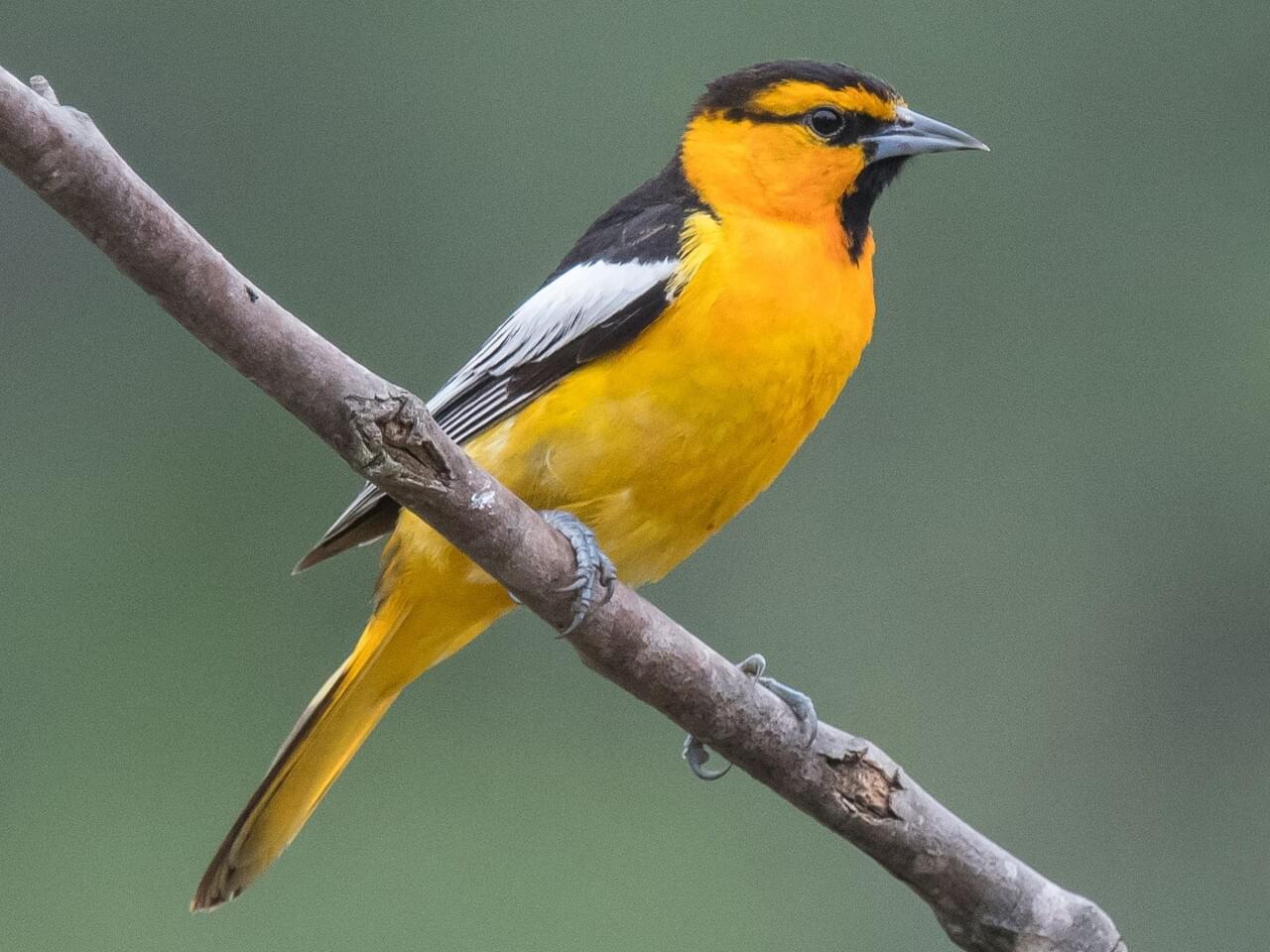 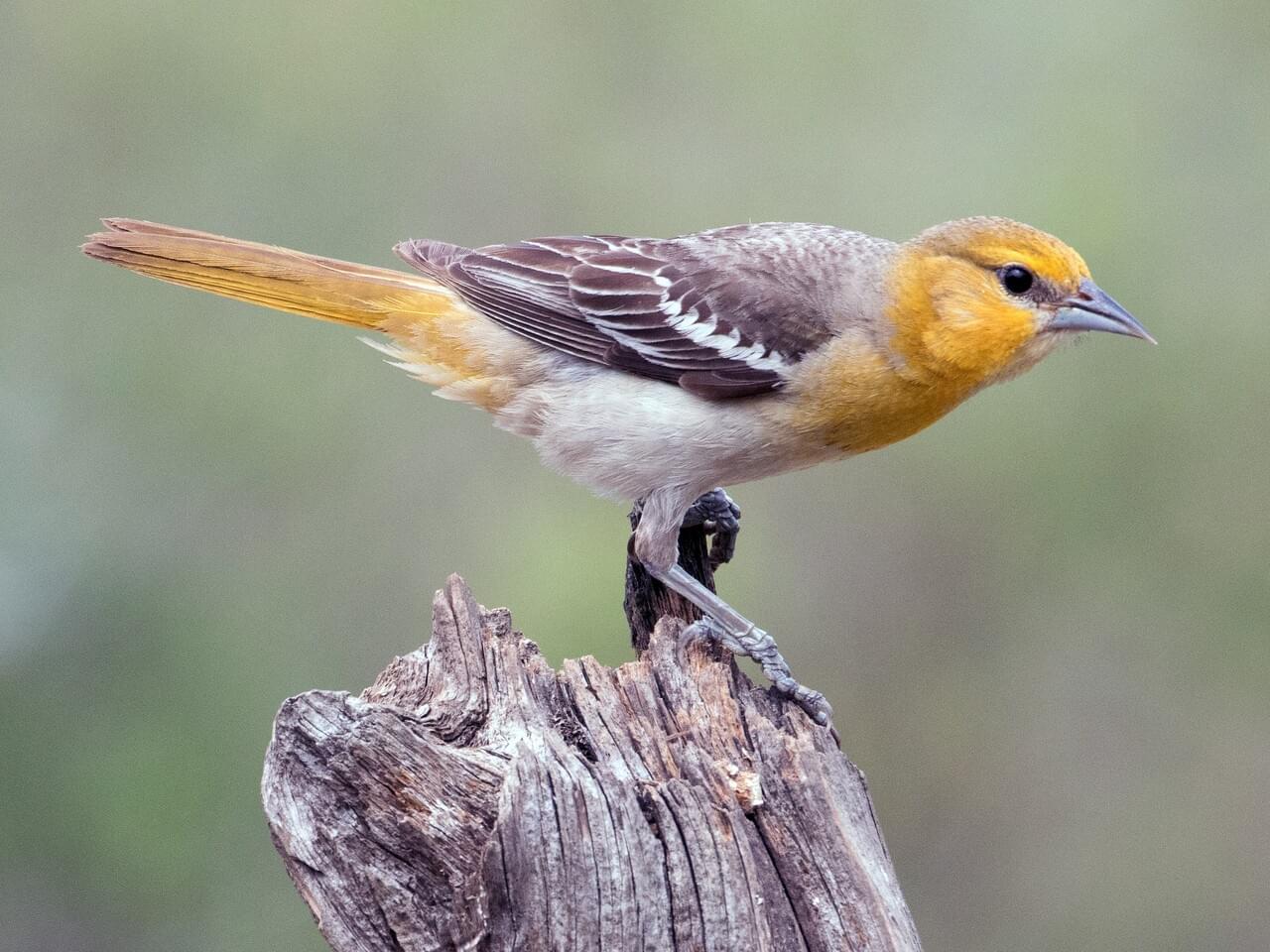 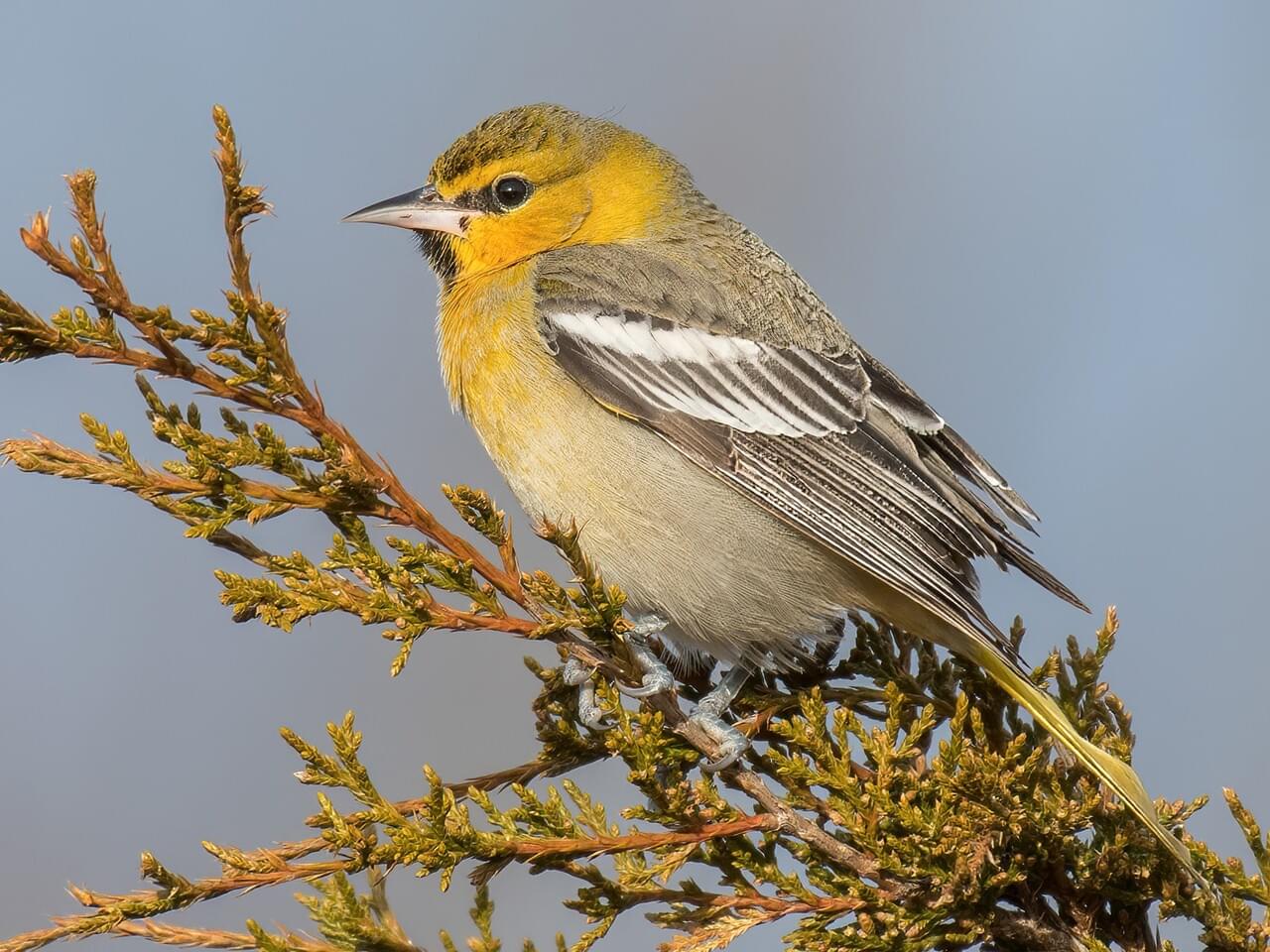 Adult male orioles are fairly easy to distinguish: Baltimore Oriole has a fully black head and white wingbars instead of the black eyeline and white wing patch of Bullock's. Adult male Hooded Oriole is orange on the neck and head with a black face; adult male Orchard Oriole is brick red, not orange. Females and immatures are trickier, especially Baltimore. Fortunately, Baltimore and Bullock's have a fairly small range overlap in the center of the continent—where they both occur, look for Baltimore's plainer, less yellowish head and less white edging on the wing coverts. Hooded Oriole of California and the Southwest has a longer tail than Bullock's and a bill that curves slightly downward. Immatures and females are more yellow on the underparts and lack the trace of an eyeline often seen with Bullock's. Immature and female Orchard Oriole is smaller than Bullock's and more greenish-yellow than yellow-orange, especially on the belly where Bullock's tends to be grayish.