A small green-backed hummingbird of the West, with no brilliant colors on its throat except a thin strip of iridescent purple bordering the black chin, only visible when light hits it just right. Black-chinned Hummingbirds are exceptionally widespread, found from deserts to mountain forests. Many winter along the Gulf Coast. Often perches at the very top of a bare branch. Low-pitched humming sound produced by wings.

In the Southwest, most common in canyons and along rivers. In arid areas, most often found near cottonwood, sycamore, willow, salt-cedar, sugarberry, and oak. Birds wintering along Gulf very often spend time in shade of oaks.

After feeding may perch on high, bare branch for several minutes, surveying territory. Captures small insects in flight (or, in the case of spiders, while ballooning) or on flowers and even on the ground. May fly from perch to grab a single flying insect and then return to perch. May capture many insects in rapid succession in a swarm. Extracts nectar from flowers by extending tongue into the corolla while hovering. During courtship and territorial defense, males display by diving 66-100 feet.

When newly built, the nest is a compact, deep cup constructed of plant down, spider silk and cocoon fibers. As the nestlings grow, the nest stretches into a wider, shallower cup. Nests from cooler areas are thicker-walled than nests from warmer areas.

A small, fairly slender hummingbird with a fairly straight bill.

Dull metallic green above and dull grayish-white below. Males have a velvety black throat with a thin, iridescent purple base. Females have a pale throat. In both sexes, the flanks are glossed with dull metallic green. Female’s three outer tail feathers have broad white tips. The bill is black.

Hovers at flowers and feeders, darts erratically to take tiny swarming insects, perches atop high snags to survey its territory, watching for competitors to chase off and for flying insects to eat. During courtship and territorial defense, males display by diving 66-100 feet.

Most often seen at feeders or perched on dead branches in tall trees. The Black-chinned Hummingbird is a habitat generalist, found in lowland deserts and mountainous forests, and in natural habitats and very urbanized areas as long as there are tall trees and flowering shrubs and vines. 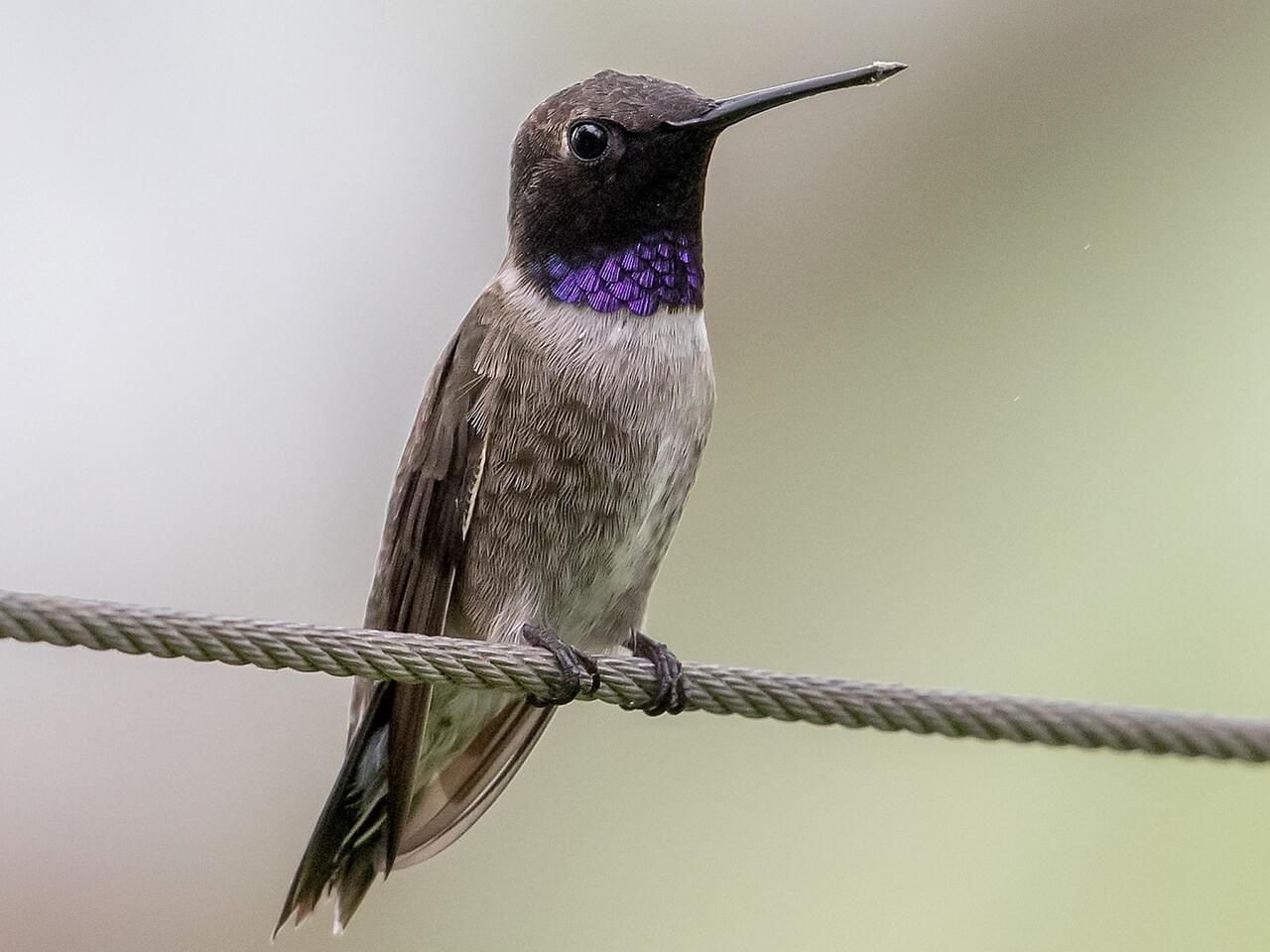 The male's black throat with its strip of deep purple at the base is diagnostic, but the brilliant throats of other hummingbirds can appear black in poor light, and the purple doesn't show up if the light doesn't hit it well. The entire throat and forehead of male Costa's Hummingbird and Anna's Hummingbird is purple. Costa's also has broad extensions on the sides of the gorget, which Black-chinned Hummingbirds lack. It's very difficult to distinguish female Black-chinned Hummingbirds from females of other species that occur in the same range. Black-chinned Hummingbirds tend to look long billed and thin necked, and they show a white collar when perched. To distinguish from female Ruby-throated Hummingbirds where their ranges overlap, look carefully at the outermost flight feather: it is knife-shaped in the ruby-throat but club-shaped in the black-chinned. If you notice feathery antennae jutting forward or if you see the bill rolling in and out, it is not a bird, but rather a bird-like hummingbird moth.