Bright purple feathers drape across the throat of male Costa's Hummingbirds, sticking out wildly to each side, like an overgrown mustache. Males show off their purple colors for females, which are dressed in green with a pale eyebrow and a whitish belly. The male loops around her and dives in broad U-shaped patterns while give a high-pithced whistle. These hummingbirds are at home in the baking heat of the Sonoran and Mojave Deserts as well as in the cooler air of coastal scrub.

Costa's Hummingbirds occur in Sonoran and Mojave Desert scrub, coastal California chaparral and sage scrub, and deciduous forest and desert scrub in Baja California, Mexico. In the Sonoran Desert they occur in desert washes with palo verde, jojoba, desert lavender, or chuparosa, on steep rock slopes, and in lowlands with saguaro, creosote bush, and cholla cacti typically below 3,000 feet elevation. In the Mojave Desert they frequent scrub and woodlands near springs and streams with cottonwoods, brittlebrush, four-winged saltbush, and other species from near sea level to 4,000 feet elevation. Along the California coast they use sage scrub and chaparral. Along the Baja peninsula they use desert scrub and deciduous forests with cardon cacti, elephant tree, Adam's tree, and tree morning-glory.

Costa's Hummingbirds feed on nectar and small flying insects. In the Sonoran Desert, they visit at least 22 different plant species, but feed most frequently on chuparosa and ocotillo. In California coastal scrub they frequently feed at white and black sage, tree tobacco, heart-leaved penstemon, and bush monkeyflower, among others.

Costa's Hummingbirds hover above flowers to take nectar and catch small flying insects in midair. Males defend territories during the breeding season around prominent perches and nectar sources. They pick 3–4 favorite perches within their territory, usually a dead twig in a palo verde, acacia, or ironwood, and sing a thin high-pitched whistle to proclaim ownership and keep intruders out. Males perform a looping dive display to entice females to mate with them and also to threaten intruding hummingbirds. They fly straight towards the female, make several loops around her and then fly straight up into the air, returning in a broad U-shaped dive. During the dive they sing a high-pitched whistle. They continue to loop around and perform dives for the female without pause, sometimes for up to 4 minutes, but usually the display lasts for about 35 seconds. If that was not enough to attract the female’s attention, they also hover directly in front of her with their gorget flared. Males typically mate with more than one female and do not help care for the young. Birds breeding in the Sonoran Desert leave the area in the summer and fall, heading towards the coast and areas with abundant flowers. Males and females defend patches of flowers during the nonbreeding season, but they often move around to take advantage of blooming plants. Although they defend nectar sources they are not as aggressive and are subordinate to larger hummingbirds.

Females collect strips of bark, small leaves, bits of lichen, and downy parts from flowers in the sunflower family. She loosely weaves all of these materials together with spiderweb to form a rather flimsy cup-shaped nest. It takes her about 4–5 days to complete a nest. The outside of the nest measures around 1.25 inches and is about 1 inch deep. Females occasionally build a new nest on top of one from a previous season.

Resembles adult female, with gray-buff edging on feathers of upperparts, and a doubly-rounded tail instead of singly-rounded. 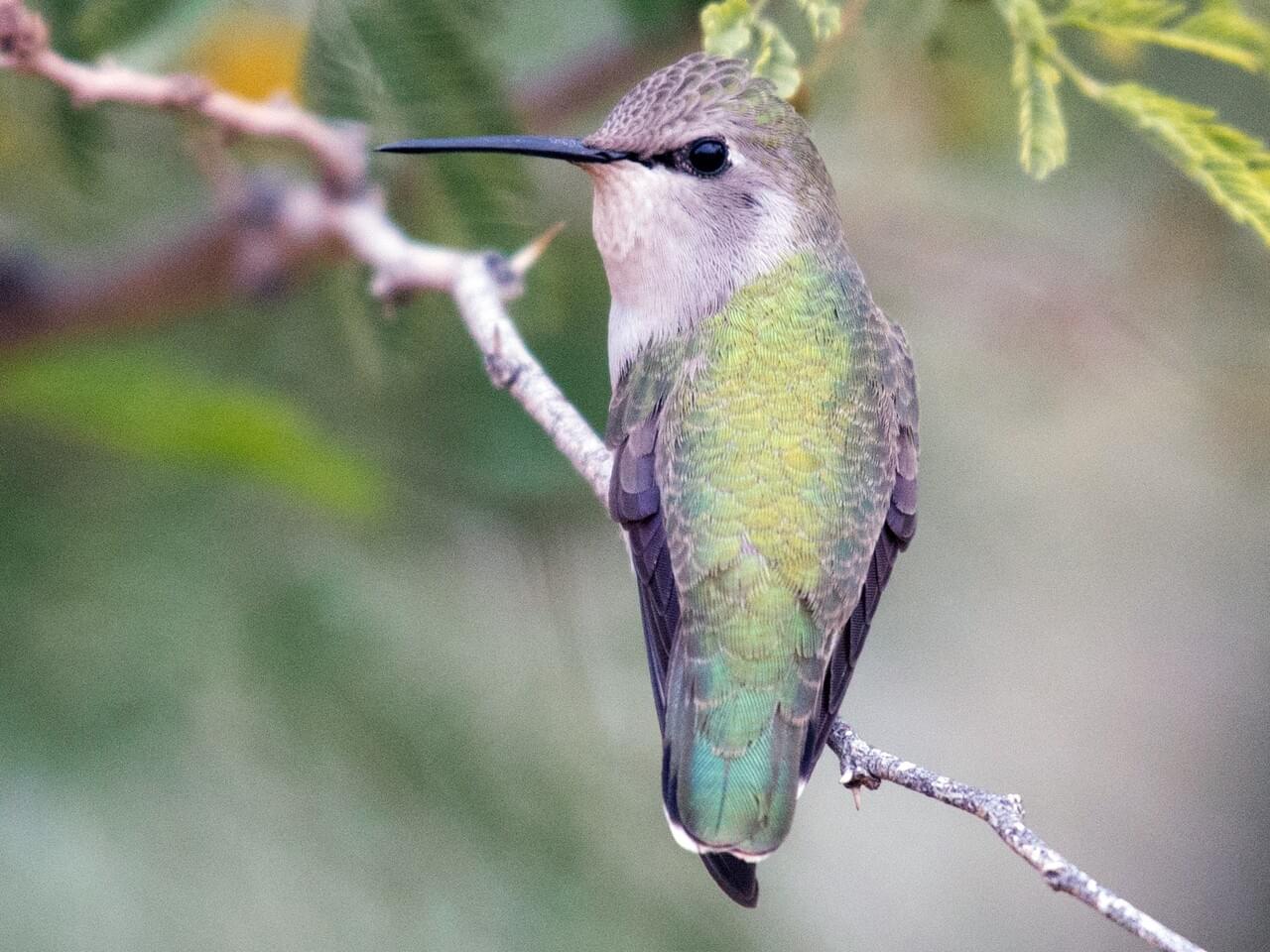