Jabbering clouds of yellow, green, and black Lesser Goldfinches gather in scrubby oak, cottonwood, and willow habitats of the western U.S., or visit suburban yards for seeds and water. These finches primarily eat seeds of plants in the sunflower family, and they occur all the way south to the Peruvian Andes. Listen closely to their wheezy songs, which often include snippets from the songs of other birds.

The Lesser Goldfinch makes its home in patchy open habitats of many kinds. From the western U.S. to South America, this songbird frequents thickets, weedy fields, woodlands, forest clearings, scrublands, farmlands, and even desert oases. You can also find them in parks and gardens in both suburban and urban settings. Some common habitats in the western U.S. include oak, pinyon-juniper, cottonwood, willow, cedar, and pine woodlands, as well as chaparral.

The Lesser Goldfinch eats mainly seeds from the sunflower family (Asteraceae, or Compositae), although they also eat coffeeberry, elderberry, and madrone fruits, as well as buds of cottonwoods, alders, sycamores, willows, and oaks. They feed in small groups, moving through low weeds and other plants to get to the seeds, buds, flowers or fruits. Napa thistle is a primary food source. To eat seeds, the Lesser Goldfinch uses its bill to pry open the outer covering, shakes its head to loosen the husk, then swallows the seed. Like American Goldfinches, they cling to the seed heads of tall plants, bending the stem down so that it can end up hanging upside down while picking at the seeds. It will occasionally supplement its diet with insects such as plant lice.

The Lesser Goldfinch is a quick little bird, constantly hovering about and jerking its tail while feeding. On the wing, it has the same dipping, bouncy flight of the American Goldfinch. And like other goldfinches, the Lesser is gregarious, forming large flocks at feeding sites and watering holes. During breeding season, the male establishes his territory by calling and singing from atop tall trees, then gives courtship calls to attract a female into his territory. When a mate arrives, he chases her in flight, as the two dart through the foliage at high speeds. Eventually they perch on the same branch, where they make courting displays—stretching their necks toward each other to touch bills and calling softly. After a few days, the male begins feeding the female, transferring food that he gathered into her bill. The male also feeds the female when she’s on the nest during incubation.

The female builds most of the nest over 4 to 8 days, while the male stays nearby and watches. She begins by collecting plant materials such as leaves, bark, catkins, cocoons and spiderwebs in her bill. She weaves these together into a cup and then lines the nest with hair, feathers, wool, rabbit fur, or cottonseed fibers to complete a dense, cup about 3 inches wide and an inch deep.

Males are bright yellow below with a glossy black cap and white patches in the wings; their backs can be glossy black or dull green (particularly on the West Coast). They have a black tail with large, white corners. Females and immatures have olive backs, dull yellow underparts, and black wings marked by two whitish wingbars. 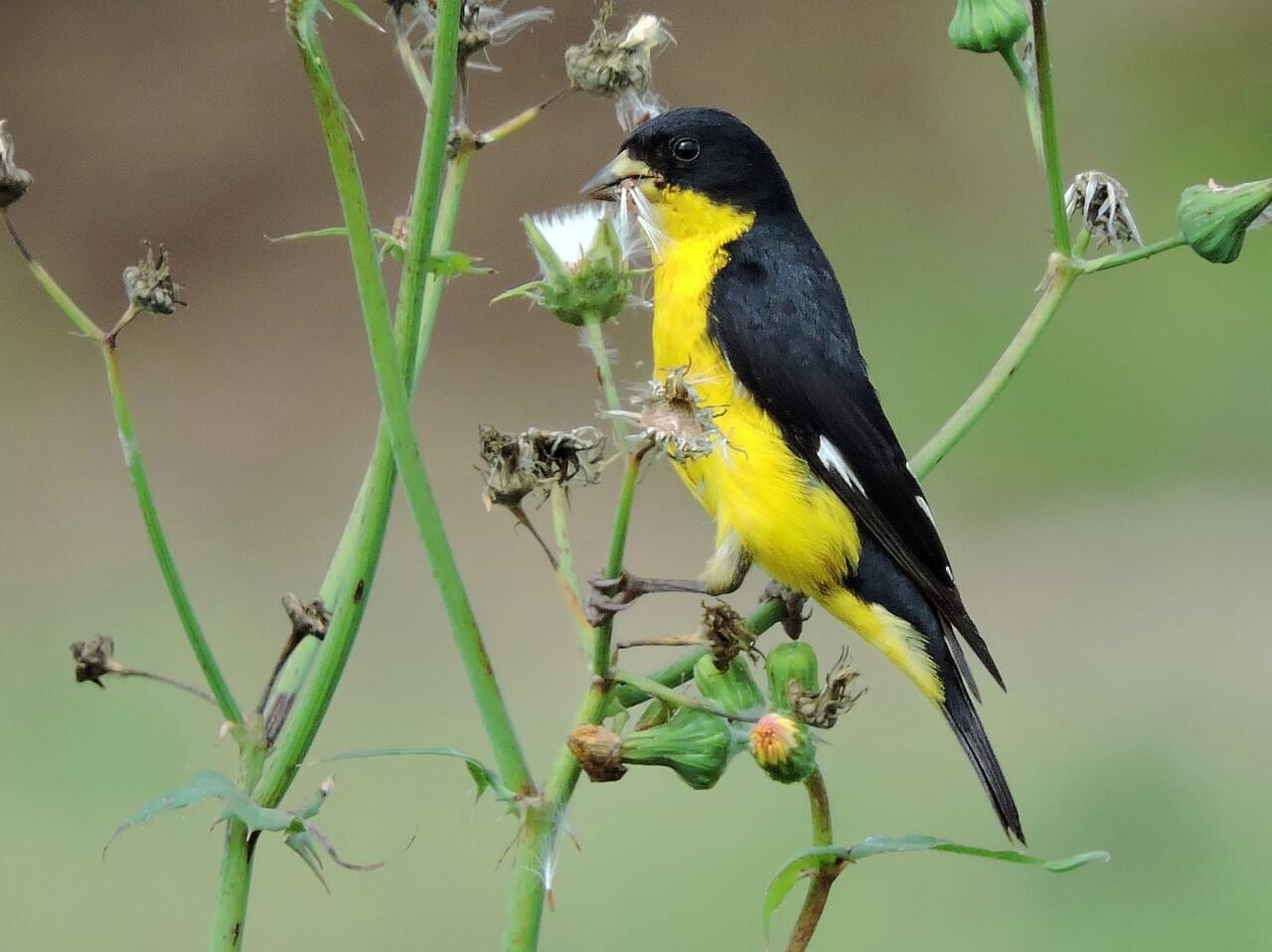 Lesser Goldfinches are only slightly smaller than American Goldfinches. Males can be easily separated by the Lesser’s completely black cap and green or black back. Females are harder to distinguish; look for the Lesser’s dark-tipped tail and dark bill. Female American Goldfinches have much more white in the tail and pink bills. Lawrence’s Goldfinch of California and the Southwest is gray-bodied with much more yellow in the wings; males have black faces, and both sexes have a yellow patch on the chest. Pine Siskins are much less yellow and heavily streaked all over with brown. Evening Grosbeaks are nearly twice the size of Lesser Goldfinches, with a much thicker, pale bill.