Originally a bird of desert thickets, the White-winged Dove has become a common sight in cities and towns across the southern U.S. When perched, this bird’s unspotted brown upperparts and neat white crescents along the wing distinguish it from the ubiquitous Mourning Dove. In flight, those subdued crescents become flashing white stripes worthy of the bird’s common name. Take a closer look and you’ll see a remarkably colorful face, with bright-orange eyes and blue “eye shadow.”

White-winged Doves live in dense, thorny forests, streamside woodlands, deserts full of cactus and palo verde, and, more recently, urban and suburban areas of the southern U.S. They tend to breed in the interiors of forests rather than near the edges. White-winged Doves now breed as far north as Oklahoma, possibly taking advantage of bird feeders and artificial heat sources in cities. Their breeding range extends south to Panama and east to Cuba. Throughout their range White-winged Doves prefer places where nesting habitat is interspersed with feeding habitat, like grain fields or desert cactus communities. In the winter White-winged Doves are found throughout most of their breeding range as well as in the southeastern United States, and some individuals wander widely across the continent.

Across much of its range, the vegetarian White-winged Dove eats mostly grains and other agricultural crops like wheat, sunflower, milo, corn, and safflower. It also eats fruits and large seeds from plants like spurge, panic grass, bristlegrass, Mexican jumping beans, Chinese tallow, leatherweed, saguaro, lime prickly-ash, brasil, privet, pigeonberry, and ocotillo. The White-winged Dove seems to be predisposed toward large seeds because of its large bill and gape, along with its slower eating style (it never pecks quickly, the way Mourning Doves do). White-winged Doves also commonly feed above ground level, unlike Mourning Doves, on seedheads, berries, and raised bird feeders. Like many birds, White-winged Doves consume small stones to help pulverize plant material in their gizzards, and they may eat snails and bone fragments as a source of calcium.

White-winged Doves walk along tree branches and on the ground; they fly in a swift and straight path. Courting and nesting males will occasionally strike bills and slap wings with each other, but they mostly defend their cooing perches and nests by calling or flailing their wings and tail. Males perform courtship flights, spiraling up into the sky and then returning to the branch he started from in a stiff-winged glide. They may also bow, puff up their necks, or fan the tail to entice females to mate; White-winged Doves are monogamous and stay together for at least one breeding season. When a predator comes to call at the nest, White-winged Doves may feign a broken wing to lead the intruder away. In other situations, they escape by flying directly into the bushes. Predators of adults or young include Great-tailed Grackles, Green Jays, Cactus Wrens, Gila Woodpeckers, Great Horned Owls, woodrats, deer mice, gray foxes, Norway rats, black rats, house cats, and snakes.

The male gathers twigs and brings them to the female, which constructs the nest over a couple of days. Made mostly of twigs, the nest also may have weeds, grasses or Spanish moss arranged in a flimsy bowl about 4 inches across. On rare occasions it’s also lined with leaves, bark, feathers, or pine needles.

White-winged Doves are brown overall, with a dark line on the cheek. A white stripe at the edge of the folded wing becomes, as the bird takes flight, a bright flash in the middle of a dark wing. The tail is tipped in white and set off with black stripes from the gray underside. Their faces are ornately marked with a black streak on the cheek, and blue skin around the red eyes. 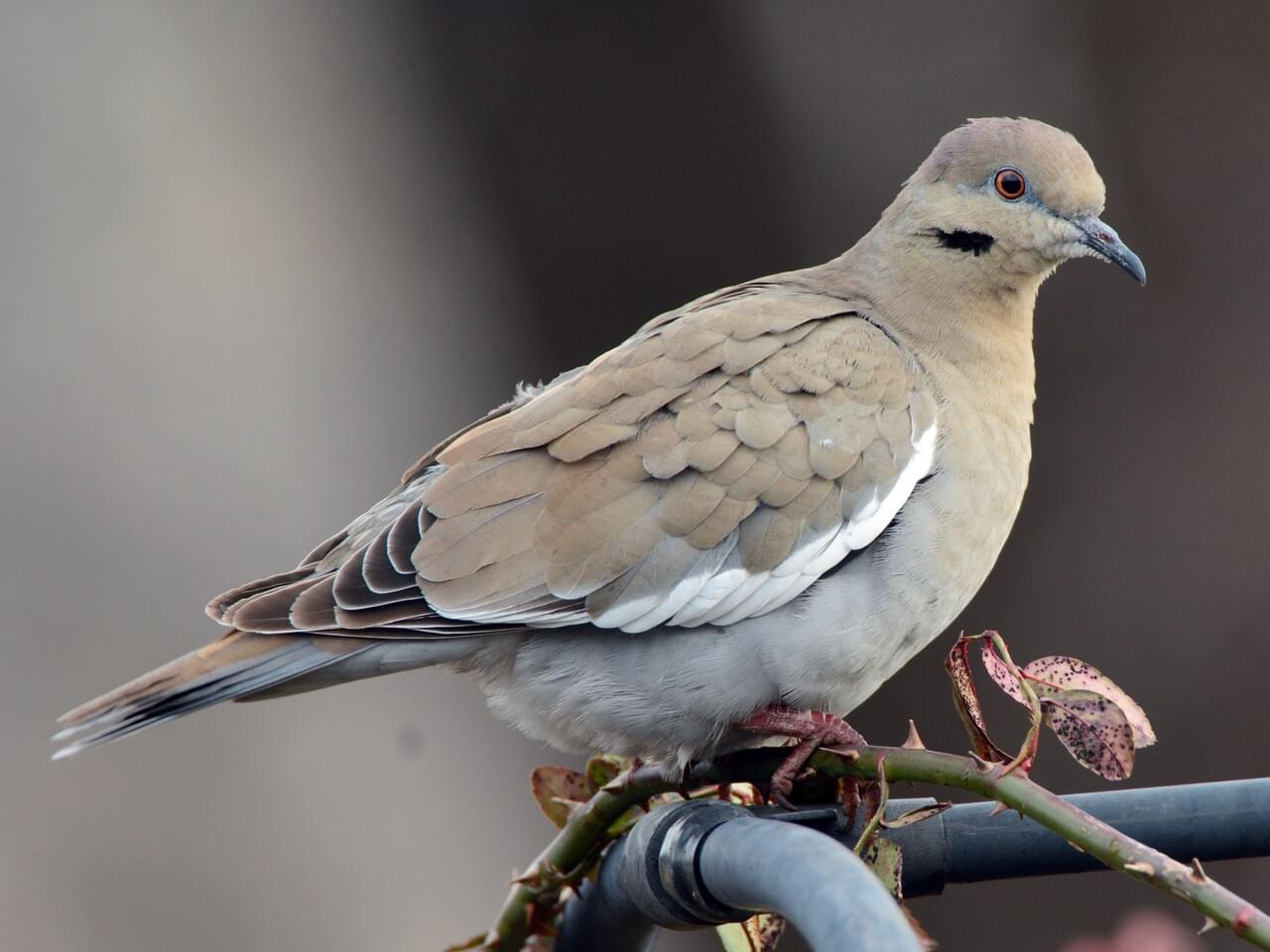 Mourning Doves are thinner-bodied than White-winged Doves with long, tapering tails and gray-brown wings. Eurasian Collared-Doves are larger and paler overall, with a black collar across the back of the neck not the side of the neck. Eurasian Collared-Doves also have larger white patches in the tail and less contrast in the tail (with no black) than White-winged Doves. The White-tipped Dove of southern Texas lacks bold white stripes in the wing and has no dark bar on the neck. The much larger Rock Pigeon tends to be much grayer, and although its plumage is variable it usually does not show bold, isolated crescents across the wing as White-winged Doves do.