If someone at a park is feeding bread to ducks, chances are there are Mallards in the fray. Perhaps the most familiar of all ducks, Mallards occur throughout North America and Eurasia in ponds and parks as well as wilder wetlands and estuaries. The male’s gleaming green head, gray flanks, and black tail-curl arguably make it the most easily identified duck. Mallards have long been hunted for the table, and almost all domestic ducks come from this species.

Mallards can be found in almost any wetland habitats, including permanent wetlands such as marshes, bogs, riverine floodplains, beaver ponds, lakes, reservoirs, ponds, city parks, farms, and estuaries. They also occur in prairie potholes and ephemeral wetlands; they may be found feeding along roadside ditches, pastures, croplands and rice fields.

Mallards are generalist foragers and will eat a wide variety of food. They don’t dive, but dabble to feed, tipping forward in the water to eat seeds and aquatic vegetation. They also roam around on the shore and pick at vegetation and prey on the ground. During the breeding season, they eat mainly animal matter including aquatic insect larvae, earthworms, snails and freshwater shrimp. During migration, many Mallards consume largely agricultural seed and grain. In city parks, they readily accept handouts from parkgoers.

Mallards are an abundant city and suburban park duck and because of constant feedings by park visitors, they can become very tame and approachable. In more natural settings and where Mallards are heavily hunted, they can be very wary of approaching people. They commonly associate with and may hybridize with other dabbling ducks. Mallards have a huge variety of displays that can be fascinating to watch and decipher. Most displays are ritualized versions of common motions: males may face off with a head-bob, threaten an aggressor with an open bill, or push against each other, breast to breast. Paired males defend their territories with vigorous acrobatic chases. Males court females by shaking or flicking the head side to side, looking over their shoulder, or raising up in the water and flapping their wings. Several males often gather around a female to display. A female encourages a male by nodding her head back and forth or paddling with her head held low.

The female forms a shallow depression or bowl on the ground in moist earth. She does not carry material to the nest but rather pulls vegetation she can reach toward her while sitting on nest. During egg-laying phase, she lines the nest with grasses, leaves, and twigs from nearby. She also pulls tall vegetation over to conceal herself and her nest. After incubation begins, she plucks down feathers from her breast to line the nest and cover her eggs. The finished nest is about a foot across, with a bowl for the eggs that is 1–6 inches deep and 6–9 inches across.

Mallards are large ducks with hefty bodies, rounded heads, and wide, flat bills. Like many “dabbling ducks” the body is long and the tail rides high out of the water, giving a blunt shape. In flight their wings are broad and set back toward the rear.

Male Mallards have a dark, iridescent-green head and bright yellow bill. The gray body is sandwiched between a brown breast and black rear. Females and juveniles are mottled brown with orange-and-brown bills. Both sexes have a white-bordered, blue “speculum” patch in the wing. 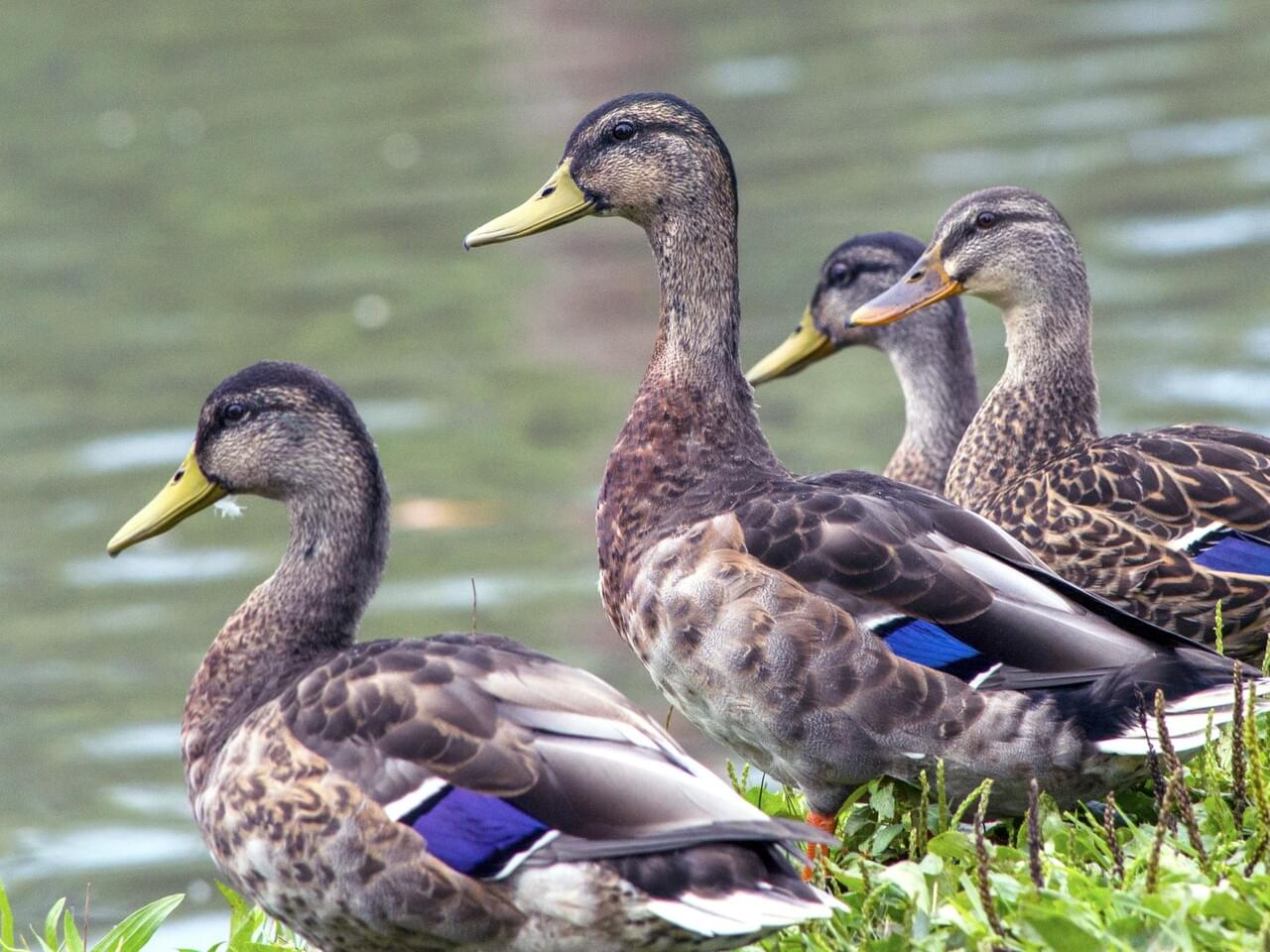 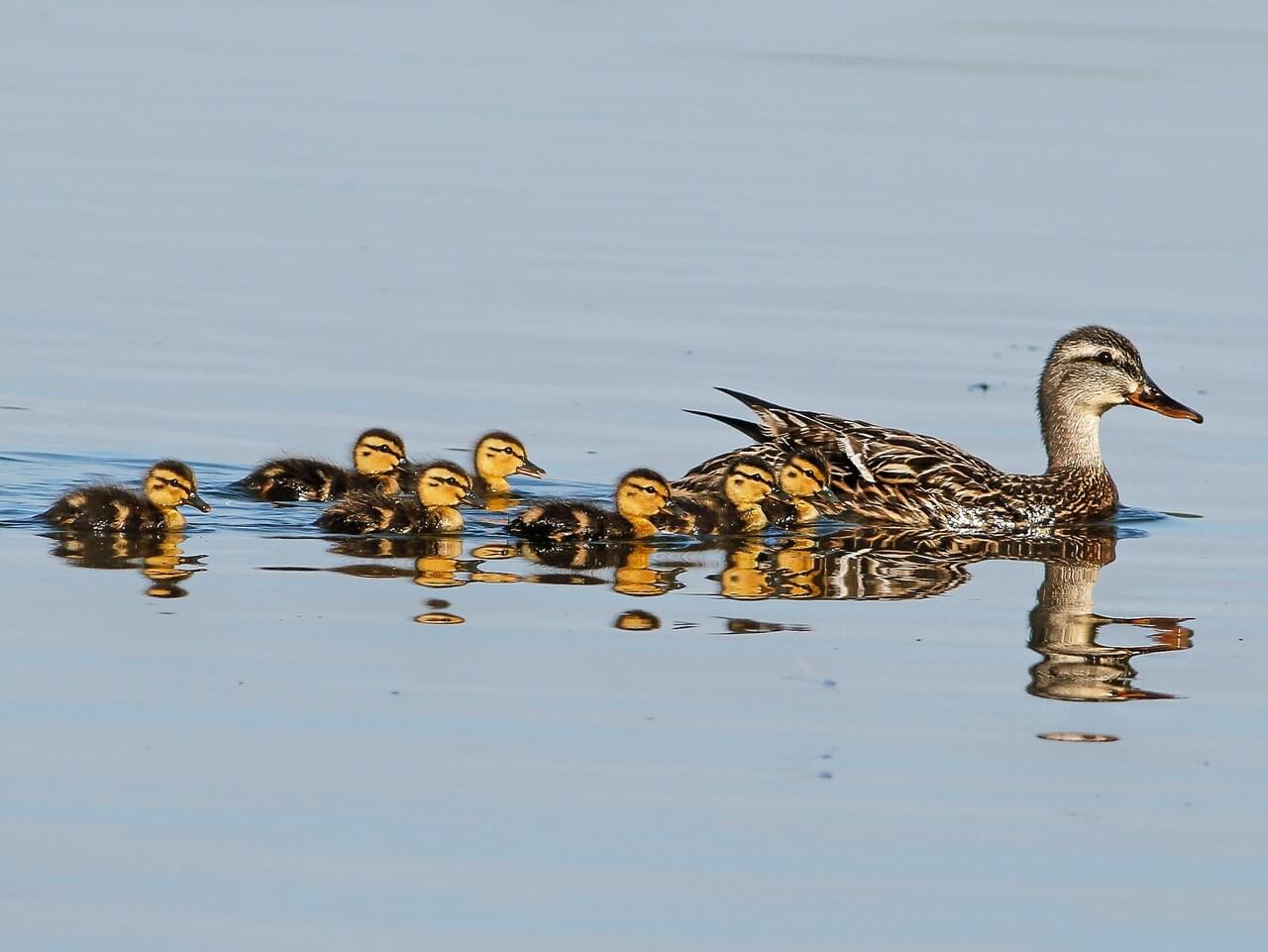 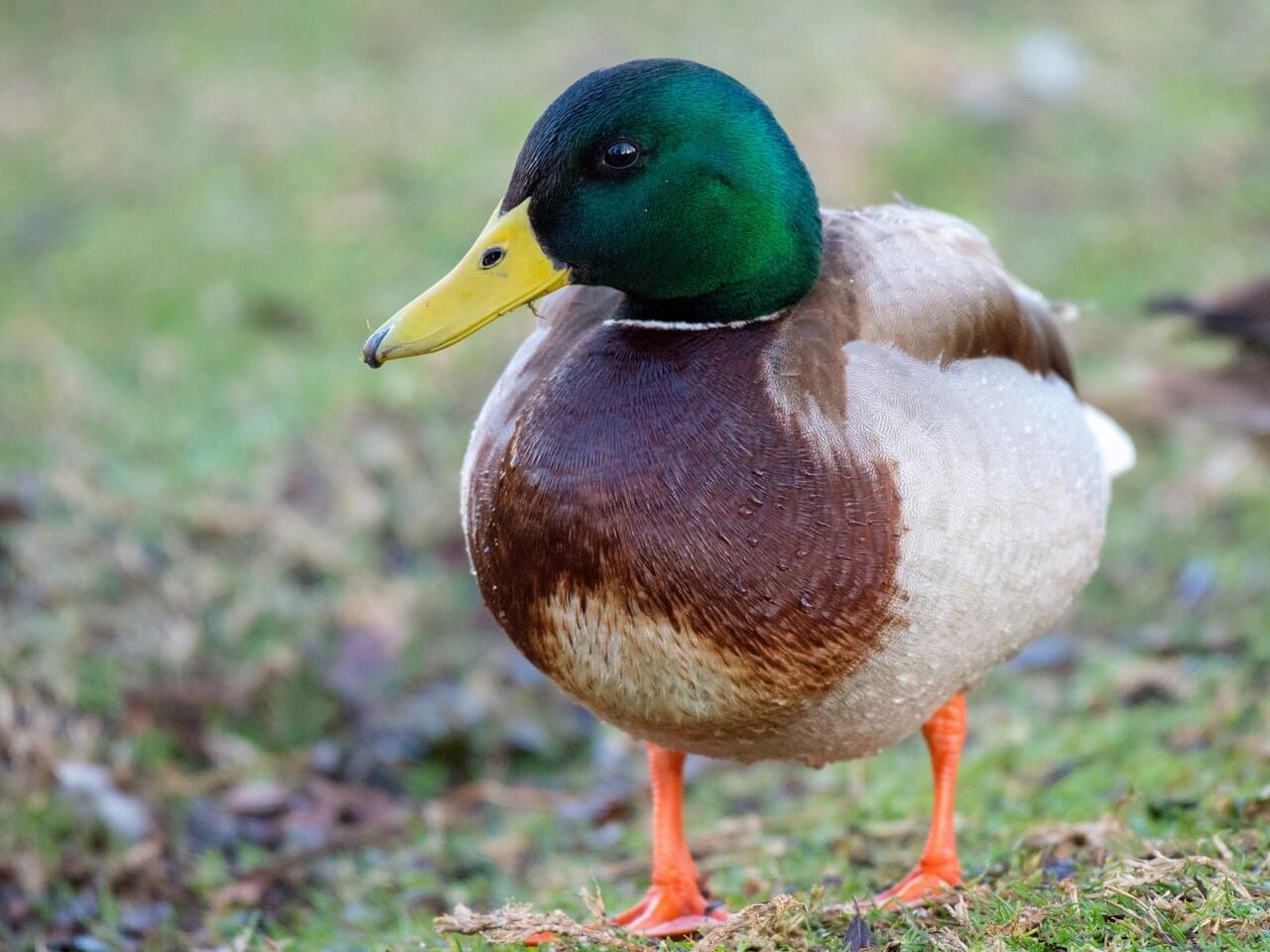 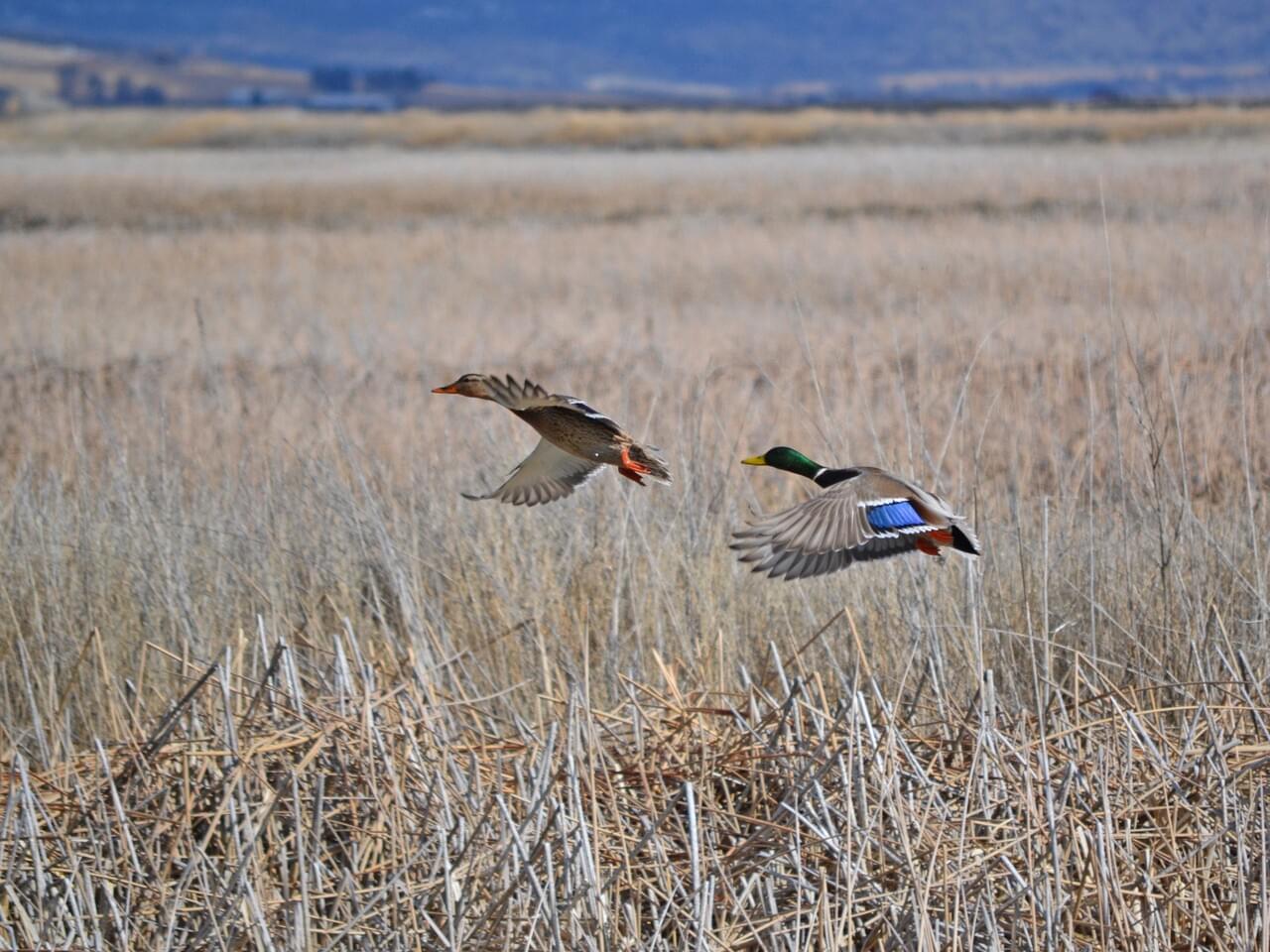 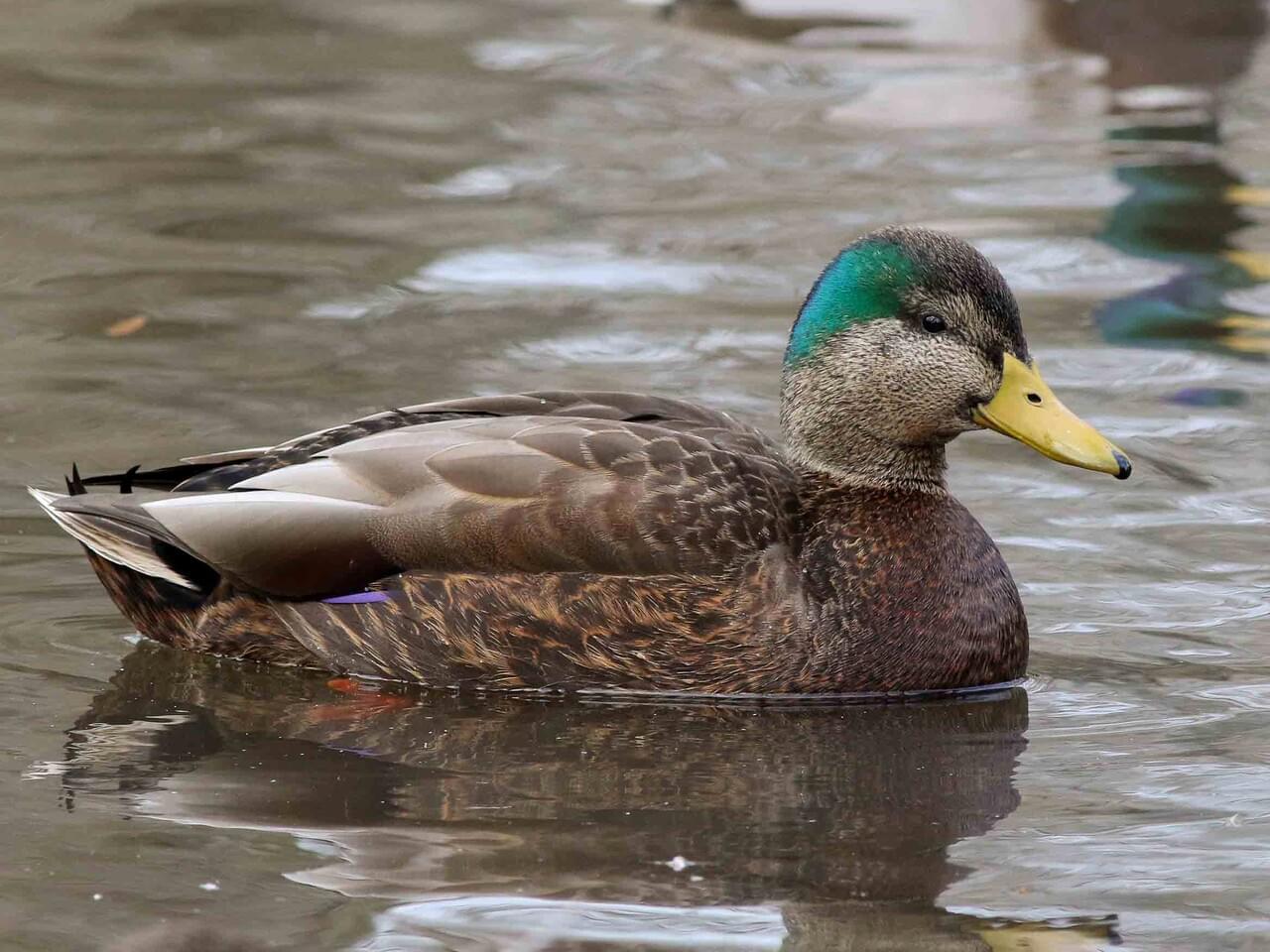 The American Black Duck of eastern North America looks like a female Mallard but has a darker body, greenish-yellow bill, and a purplish “speculum” patch in the wings that does not have white borders. Identification is complicated by the frequent occurrence of hybrids between the two species. The Mottled Duck of the coastal Southeast also resembles a female Mallard, but is somewhat darker, with less black on the bill (just a small black spot at the base), and lacks the broad white borders to the speculum. Female Gadwalls have a slimmer bill with a thin orange line along the edge and often show a white patch on the folded wing. Northern Shovelers have a bill that is noticeably larger and wider than any other duck’s. Its body pattern is different from a Mallard’s, too: the belly and sides are chestnut, set off by a white breast and undertail. Female Northern Shovelers, in addition to their very large bill, are paler overall, with lots of buffy and tan tones to the body. The green heads of Red-breasted Mergansers and Common Mergansers superficially resemble a male Mallard’s, but these birds’ shape and behavior are much different: mergansers are streamlined ducks with slender bills, and they dive instead of dabble.