If you’ve been hearing an endless string of 10 or 15 different birds singing outside your house, you might have a Northern Mockingbird in your yard. These slender-bodied gray birds apparently pour all their color into their personalities. They sing almost endlessly, even sometimes at night, and they flagrantly harass birds that intrude on their territories, flying slowly around them or prancing toward them, legs extended, flaunting their bright white wing patches.

Year-round the Northern Mockingbird is found in areas with open ground and with shrubby vegetation like hedges, fruiting bushes, and thickets. When foraging on the ground, it prefers grassy areas, rather than bare spots. Common places to find Northern Mockingbirds include parkland, cultivated land, suburban areas and in second growth habitat at low elevations.

Northern Mockingbirds eat mainly insects in summer but switch to eating mostly fruit in fall and winter. Among their animal prey are beetles, earthworms, moths, butterflies, ants, bees, wasps, grasshoppers, and sometimes small lizards. They eat a wide variety of berries, including from ornamental bushes, as well as fruits from multiflora rose. They’ve been seen drinking sap from the cuts on recently pruned trees.

Northern Mockingbirds are found alone or in pairs throughout the year. They make themselves easily visible, sitting and singing atop shrubs, trees, utility lines, fences, and poles. On the ground they walk, run, and hop along the ground, tail cocked upwards, grabbing at prey on the ground or snatching insects just over the grass. Mockingbirds sometimes fly up and hover to grab at hanging fruit. The Northern Mockingbird is aggressive throughout the year. Females typically fend off other female mockingbirds, while males confront male intruders. Males disputing territory boundaries fly toward each other, land near the boundary, and face off, silently hopping from one side to another. Eventually, one bird retreats and the other chases it a short ways. If neither bird retreats, they may fly at each other, grappling with wings and claws and pecking at each other. Mockingbirds are also territorial around other bird species as well as dogs and cats. The flight style of mockingbirds is variable but typically leisurely, with showy wingbeats. Sometimes Northern Mockingbirds simply drop quickly from a perch with their wings folded.

Mockingbird nests consist of dead twigs shaped into an open cup, lined with grasses, rootlets, leaves, and trash, sometimes including bits of plastic, aluminum foil, and shredded cigarette filters. The male constructs the twig foundation while the female makes most of the lining.

A medium-sized songbird, a bit more slender than a thrush and with a longer tail. Mockingbirds have small heads, a long, thin bill with a hint of a downward curve, and long legs. Their wings are short, rounded, and broad, making the tail seem particularly long in flight.

Mockingbirds are overall gray-brown, paler on the breast and belly, with two white wingbars on each wing. A white patch in each wing is often visible on perched birds, and in flight these become large white flashes. The white outer tail feathers are also flashy in flight. 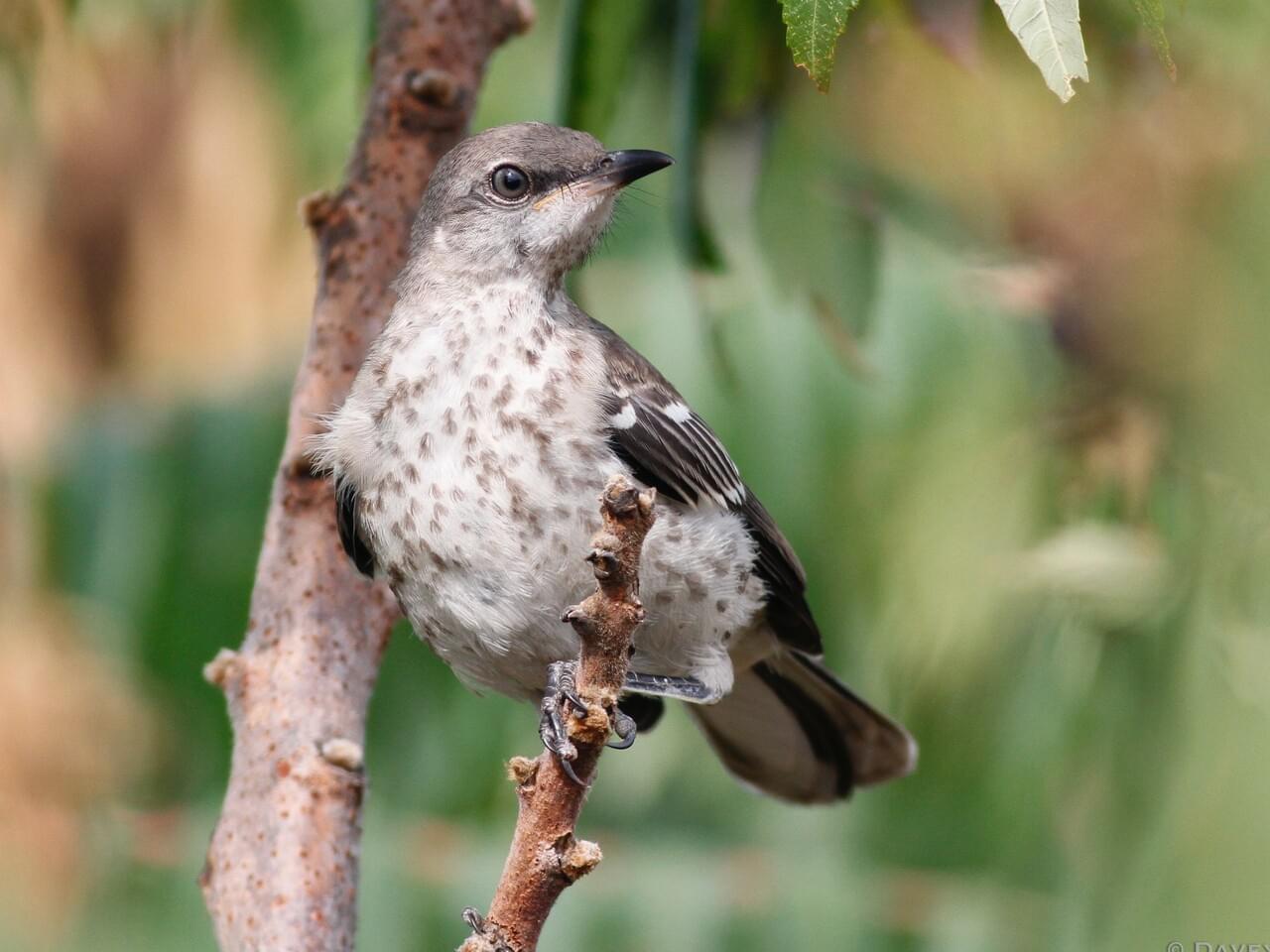 Both Loggerhead Shrike and Northern Shrike have the same overall pattern as mockingbirds but have blacker wings, a bigger head, black face, and heavy, hooked bill. Gray Catbirds are much darker gray, with no white in the wings or tail. Townsend's Solitaires are birds of the mountains; they have a pale eye-ring and a small, buffy mark in the wing rather than bold wingbars. Blue-gray Gnatcatchers are less than half the size of a Northern Mockingbird, with a white eyering and a tendency to flit quietly through high branches. Sage Thrashers have much less white on the wing, no white on the tail, and a pale eye.