John James Audubon named this bird while he was in South Carolina. The curious, intelligent Carolina Chickadee looks very much like a Black-capped Chickadee, with a black cap, black bib, gray wings and back, and whitish underside. Carolina and Black-capped chickadees hybridize in the area where their ranges overlap, but the two species probably diverged more than 2.5 million years ago.

Carolina Chickadees may be found in deciduous and mixed deciduous-coniferous woodlands, swamps, riparian areas, open woods and parks, and also in suburban and urban areas.

In winter, the Carolina Chickadee’s diet is about half plant, half animal. The rest of the year about 80–90 percent of their diet is animal (mostly insects and spiders). Carolina Chickadees glean insects from foliage and tree bark, often hanging upside down to do so. They hold seeds and insects in their feet, wedged against the branch they’re perched on, to peck into them. They readily use bird feeders.

Carolina Chickadees associate in flocks during winter. Each flock member has a rank; once spring arrives, the highest ranking individuals will nest within the flock’s territory; lower ranking birds must travel farther to successfully claim a territory and many don’t nest that season. Throughout the year, members of pairs, families, and flocks communicate with one another constantly.

Nesting female Carolina Chickadees sleep in the nest cavity while males sleep in a nearby sheltered branch in a tree, vine, or shrub. The rest of the year, birds may sometimes sleep in sheltered branches; usually they sleep in cavities, some which they excavated, others which may be natural or excavated by woodpeckers. Carolina Chickadees sleep individually, but from night to night different members of a flock may sleep in the same cavity. They compete with Downy Woodpeckers, Brown Creepers, and Tufted Titmice for these cavities.

Carolina Chickadees actively defend an individual space, keeping at least 2.2 feet, and sometimes at least 5 feet, between individuals; when two are closer than that, the dominant bird may make gargle calls. At feeders, each bird typically takes a seed and carries it to a branch somewhat isolated from other chickadees to eat.

During migration and winter, other species associate with Carolina Chickadees, which are found with other species about 50 percent of the time. Tufted Titmice, which are dominant over them, are the most common flock associates. Black-capped Chickadees, Ruby-crowned and Golden-crowned kinglets, Red-breasted, White-breasted and Brown-headed nuthatches, Brown Creepers, and Downy and Hairy woodpeckers tend to gravitate to these flocks, which are led by the Carolina Chickadees, Tufted Titmice, or both.

Both members of a pair excavate a cavity or choose a cavity or nest box. Carolina Chickadees don’t seem to have a preference for nest boxes filled with or without sawdust. The female builds the nest base with moss and sometimes strips of bark. Then she adds a thick lining of hair and/or plant fibers.

This tiny, approachable bird has a short neck and large head, giving it a distinctive spherical body shape. Its tail is fairly long and narrow. Its bill is a bit thicker than a warbler’s but thinner than a finch’s.

Carolina Chickadees have a black cap and bib separated by stark white cheeks. The back, wings, and tail are soft gray. 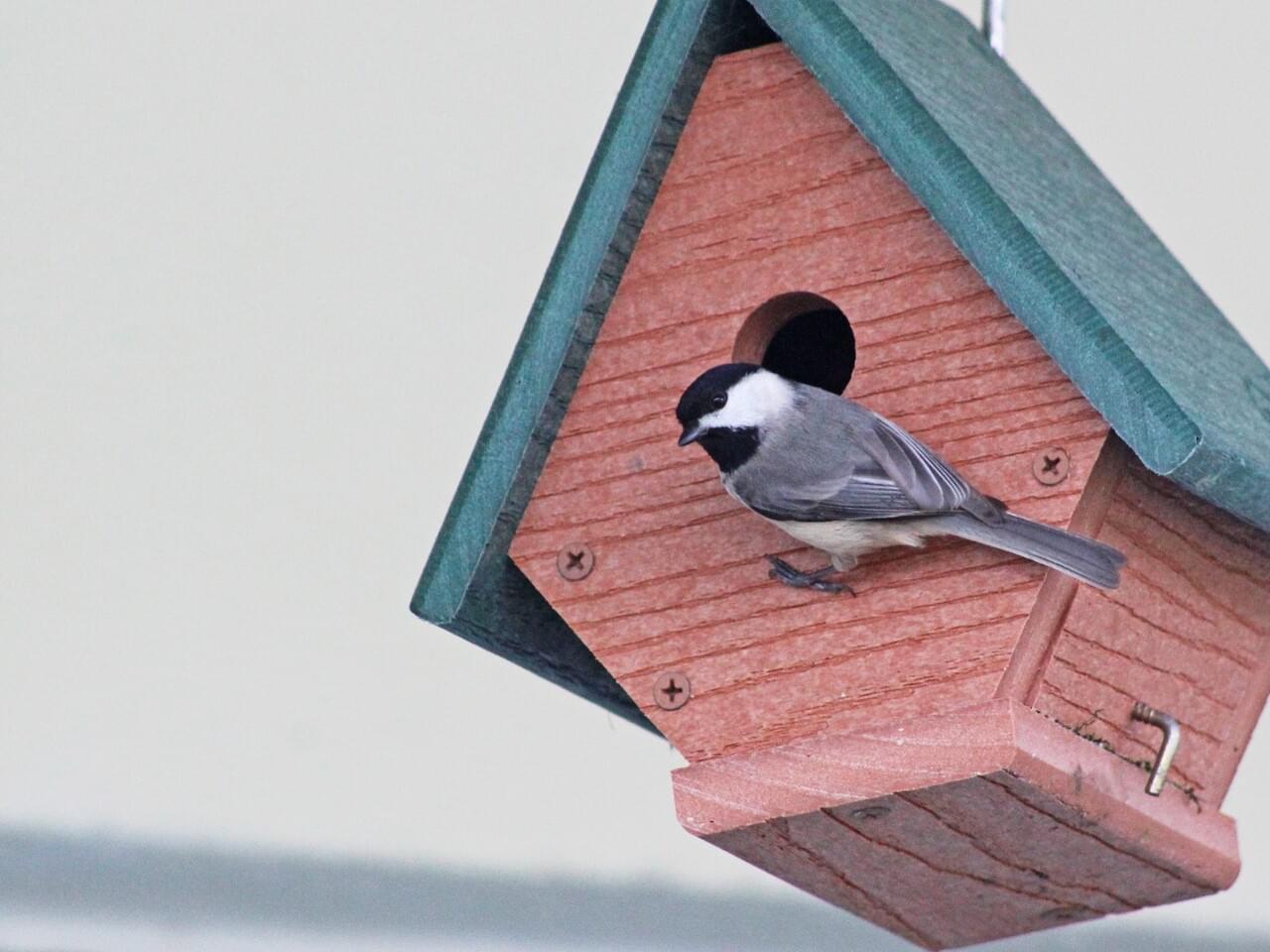 The ranges of Black-capped and Carolina chickadees don't overlap much. Where they do overlap, listen for differences in their voices: Carolinas have a four-noted song, and a faster chick-a-dee call. Also look for Carolina Chickadees to show very little white edges in the folded wing and a black bib that's smaller and looks cleaner at the edge. White-breasted Nuthatch has a thicker shape, shorter tail, longer bill, and white throat. During spring migration, adult male Blackpoll Warblers have a black cap and bib with white cheeks, but their back and sides are conspicuously streaked and the legs are yellow and they stay upright as they forage, sticking to the tops of trees.